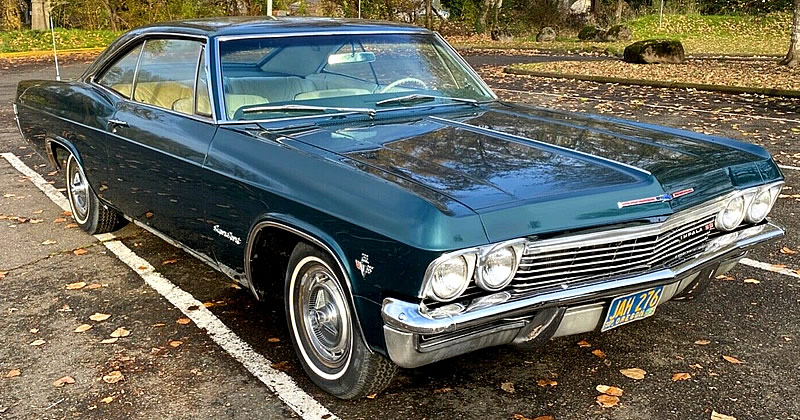 Mid-sixties Impalas are really popular and none more so that the SS version. This 1965 Chevrolet Impala SS two-door Sport Coupe really looks great in Cypress Green and has been in the same family its entire life. The owner’s Grandmother bought the car new and then sold it to them 20 years ago. It’s done just 80,000 miles since it rolled off the production line.

With a full redesign for 1965, this was the fifth generation Impala and were the largest Chevrolet models to date.

To the rear the familiar triple unit taillights of the Impala are present with the SS black-filled rear cove band with Impala SS badge to the right.

In 1965 the SS was still a trim package and not a performance package in itself (that happened in 1966). It could be had with a Turbo-Thrift 230 cubic inch six-cylinder. This car has the base V8 – a 283 cubic inch Turbo-Fire producing 195 horsepower. It was also ordered with Powerglide automatic transmission and air conditioning costing $187 and $363 respectively.

There were 216,114 Chevrolet Impala SS 2-door Sport Coupes were built, although this figure includes both 6-cylinder and V8 engines.

This ’65 Chevy Impala SS is currently for sale on eBay. (follow the link for even more photos)