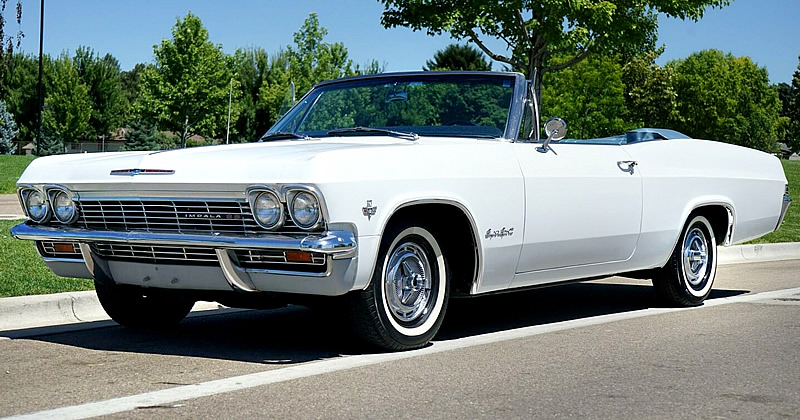 1965 was a great year for Chevrolet. Their full-size cars had got bigger, sales were up and they were still the number one car manufacturer. They actually sold over 1 million Impalas that year – pretty impressive.

The new bodies were more rounded than the previous year and had less trim giving them a cleaner look. The SS or ‘Super Sport’ version was Chevrolet’s prestige Impala and offered some extra refinements. It was only available in two body styles: a 2-door hardtop and a convertible with the latter being the most expensive Impala available at the time.

This Ermine White example has been in the same family since it was bought new by the current owner’s mother. This well-loved car was the subject of a full and sympathetic restoration around 2,000 miles ago. The mileage still sits at 61,427.

Outside, the SS had “Super Sport” and “SS” trim, special wheel covers and bright wheelhouse moldings but interestingly, no lower body molding as the standard Impala had.

Distinctive door panels with the SS emblem were a feature of SS cars. There were bucket seats with a center console as standard too. The metallic blue interior has to be among one of our favorite interior colors Chevrolet had on offer during the mid-sixties.

Under the hood there’s a 327 cubic inch Turbo-Fire V8 engine outputting 250 horsepower. This is paired with a Powerglide automatic transmission – a combination that would have cost the original buyer an additional $401.

Chevrolet produced 239,500 V8 Impala Super Sports for the 1965 model year. This figure includes both the Hardtop and Convertible models. If you wanted to order a convertible back then the base price was $3,212 for the (283 cubic inch) base V8 (the six cylinder car was $108 less).

This ’65 Impala SS Convertible is currently for sale on eBay. (follow the link for even more photos)