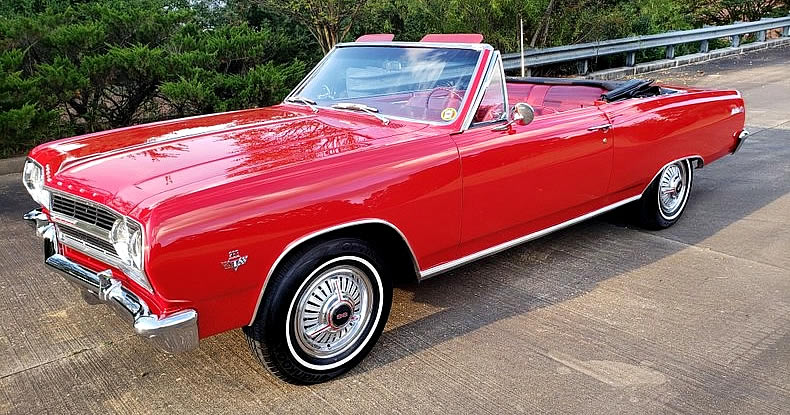 It’s 1965 and things had begun to change. We were beginning to enter the muscle car era and while this Chevy Chevelle Malibu SS Convertible isn’t blessed with one of the biggest engines, its lighter body still means it packs a bit of a punch and life doesn’t get much better than top down cruising in one of these early cars.

Apart from a color change, this Malibu has remained remarkably true to its original form. Much of the configuration is as it left the factory and the 283 V8 remains original when so many cars have ended up having a big block dropped in and the factory engine long gone.

Both standard Chevelles and Super Sport models had exactly the same powertrain options meaning you do see some six cylinder SS cars. However, with the base V8, a 283 cubic inch, 195 horsepower Turbo-Fire costing just $53 extra, it was an obvious choice to get a V8 equipped car. Just 8,585 six-cylinder SS cars were sold compared to 72,527 with a V8.

The powerglide automatic transmission in this car would have cost an additional $199. Another $86 was spent on power steering when the car was originally ordered.

This ’65 Chevelle SS Convertible is currently for sale on eBay. (follow the link for even more photos)