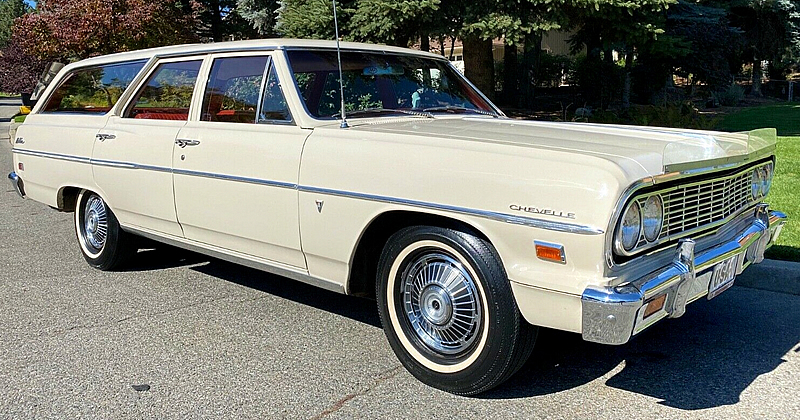 Back in the early sixties Chevrolet saw there was demand for cars both smaller and cheaper models than their full-size models – the result was the launch of the Chevelle for the 1964 model year.

These great cars sat just above the Compact Chevy II and soon became known as the “Senior Compact”. It was a car that really appealed to the baby boomers who had now outgrown their 1955-57 Chevrolets.

This beautiful one owner Malibu wagon has done under 58,000 actual miles miles, is in fabulous condition and is an unrestored survivor that still wears the original Dessert Beige paint from the factory in Fremont, California where it was made.

The Chevelle series contained 11 different models split into 2 lines, the 300 and Malibu with the latter being the upper level. The Malibu could be easier identified with its rear fender badging and full-length mid-bodyside moldings.

Check out the fabulous condition of the medium red imitation leather interior (code 774). It’s the one it left the factory in and is in remarkable condition. Even the color-keyed deep-twist carpet that came standard with the Malibu is the original.

The padded instrument panel was still an option back in 1964. As too was the AM radio which still works perfectly on this wagon.

Under the hood is the original 283 cubic inch V8 with the original owner choosing to pair it with a (extra-cost – $199) Powerglide automatic transmission.

This ’64 Chevelle Malibu Station Wagon is currently for sale on eBay. (follow the link for even more photos)