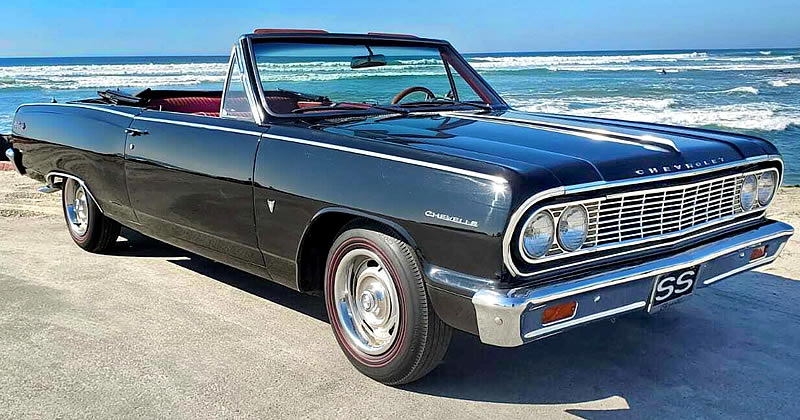 This 1964 Chevelle Malibu Super Sport Convertible in Tuxedo Black was originally built in the Los Angeles, CA assembly plant. It has been the subject of a very nice restoration.

The Super Sport Chevelle was available in just two-versions: the Sport Coupe and Convertible.

The 1964 model year saw the Chevelle launched and was Chevrolet's answer to the Ford Fairlane and was the first mid-size Chevy.  It's based on the Fisher "A-body" that is shared with the Pontiac Tempest and Buick Skylark.

Under the hood is the original 283 cubic inch, 4-barrel carb, Turbo-Fire V8 engine that outputs 220 horsepower. This is paired with a 4-speed manual transmission and is combination that would have cost the original owner a further $296 when the car was ordered new.  The base engine that came with the Chevelle was actually the 6-cylinder, 194 cubic inch Hi-Thrift that output 150 horsepower.

The SS version of the Chevelle Convertible cost a further $162. Other options on this car include: power steering and power brakes costing $86 and $43 respectively.

When new this the base price of this car would have been $2,749.

This Chevelle SS is currently for sale on eBay. (follow the link for even more photos﻿)