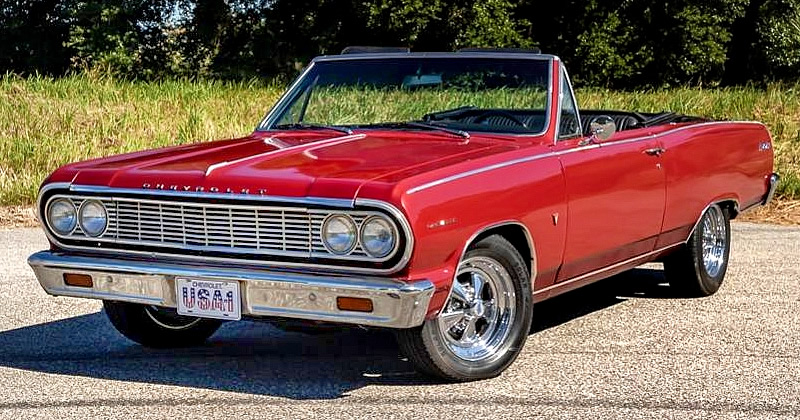 This 1964 Chevelle Malibu Super Sport Convertible was originally built in the Baltimore, MD assembly plant and is a great example of these very eye-catching cars.

The Super Sport Chevelle was available in just two-versions: the Sport Coupe and Convertible.

The 1964 model year saw the Chevelle launched and was Chevrolet’s answer to the Ford Fairlane and was the first mid-size Chevy.  It’s based on the Fisher “A-body” that is shared with the Pontiac Tempest and Buick Skylark.

The Chevelle Super Sport came with a very classy interior which included leather-grain vinyl bucket seats, a unique instrument cluster and center console with the Powerglide and 4-speed equipped cars.

Under the hood is the original 283 cubic inch, 4-barrel carb, Turbo-Fire V8 engine that outputs 220 horsepower. This engine has now been paired with an upgraded Turbo 350 Automatic Transmission.

The base engine that came with the Chevelle was actually the 6-cylinder, 194 cubic inch Hi-Thrift that output 150 horsepower.

The SS version of the Chevelle Convertible cost a further $162. Other options on this car include: power steering and power brakes costing $86 and $43 respectively.

When new the base price of the SS Convertible would have been $2,749.

This ’64 Chevy Chevelle Malibu SS is currently for sale on eBay. (follow the link for even more photos)