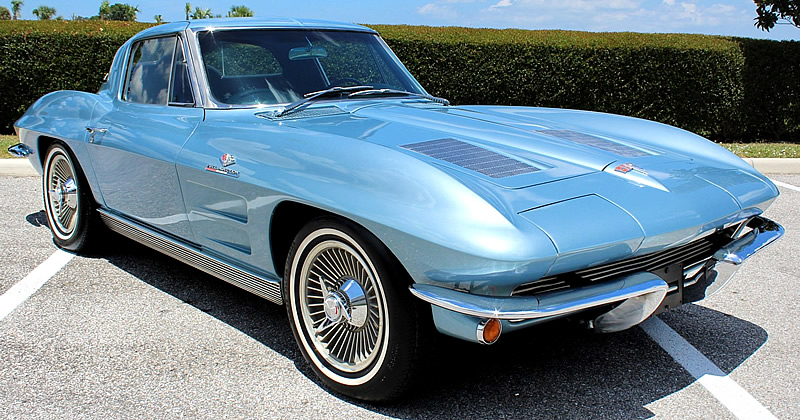 Something very special in Chevy Corvette history – the 1963 models! The first of the new C2 shape, a dramatic new design and the first major new look since the Corvette’s inception back in 1953.

Previously only available as a convertible, the Corvette was now available as a beautiful coupe. 1963 however, was the only year they used a (controversial at the time) split rear window in the coupe.

While it is painful and hard to imagine now, shortly after the 1964 models were released with one-piece rear windows, a kit was available to convert 1963 coupes to one-piece glass. Those that had that conversion done have obviously lost value leaving the remaining original split windows even scarcer. How many got converted back again we wonder?

The new models actually used twice as much steel in its central body structure. However, with the reduction in quantity of fibreglass and other savings the overall weight was actually less on the new models.

The wheelbase was reduced by 4 inches and compared to its 1962 predecessor and it was the first time they had used independent rear suspension.

Inside, the interior has bucket seats, a cockpit-cluster console and deep-twist carpeting.

While all 1963 Corvettes were fitted with a 327 V8 under the hood, it did come in four different outputs. The 250 horsepower version was standard. This particular car has the very desirable, fuel injected 360 horsepower version. Paired with a 4-speed manual transmission this would have cost an original owner a further $618.

This ’63 Chevy Corvette is currently for sale on eBay. (follow the link for even more photos)