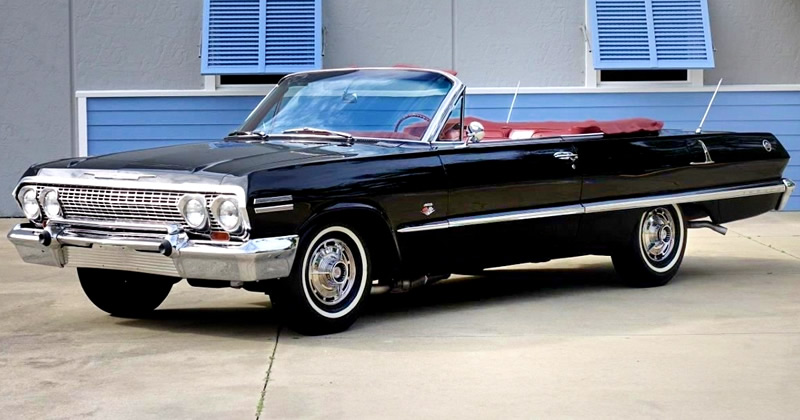 Imagine the scene will you? The husband comes home and says I’ve bought a nice, big family convertible. It’s a Chevrolet with Jet-Smooth ride.  He smiles as he turns the key and there is the unmistakable sound of a 409 cubic inch V8 producing 340 horsepower.

Well that’s what this 1963 Chevrolet Impala SS Convertible is equipped with. That’s the great thing about these full-size cars. They could just have a six cylinder engine in them or a huge big block like this.

Even the Super Sport (SS) emblems on the rear fender aren’t necessarily a giveaway. In 1963 it was still an equipment package and didn’t necessarily mean you had even a V8 under the hood.

However, being a top-of-the-line Impala with a 409 and the SS package makes this one very desirable car to own. A lot of fun too. With its Tuxedo Black paint (code 900) it’s sure to drawn a lot of attention!

The Super Sport package got you, among other things, an all-vinyl, bucket seat interior with center console.

Power comes from the biggest engine Chevrolet had on offer for 1963 – the 409 cubic inch Turbo-Fire V8 with four-barrel carburetor. This mighty beast produced 340 horsepower!

The base Impala came with a 6 cylinder 230 cubic inch engine. To upgrade to the Turbo-Fire 409/340 engine would have cost the original buyer $350. The heavy-duty 4-speed manual transmission would have added an extra $237.  The Super Sport package was $161 and if you factor in the power steering and power brakes costing $86 and $43 respectively, you have an ‘extras’ list costing nearly $900.

Considering the base Impala Convertible cost was $2,971 that was a chunk of extra change to throw down for the car. Production figures are a little vague for Chevrolet’s of this era. We do know that they produced 82,659 Impala Convertibles. We also know that 16,920 Chevy cars had the 409 cubic inch V8 installed (most of which were SS). What we don’t know is the exact amount with this combination.

This ’63 Impala SS 409 is currently for sale on eBay. (follow the link for even more photos)