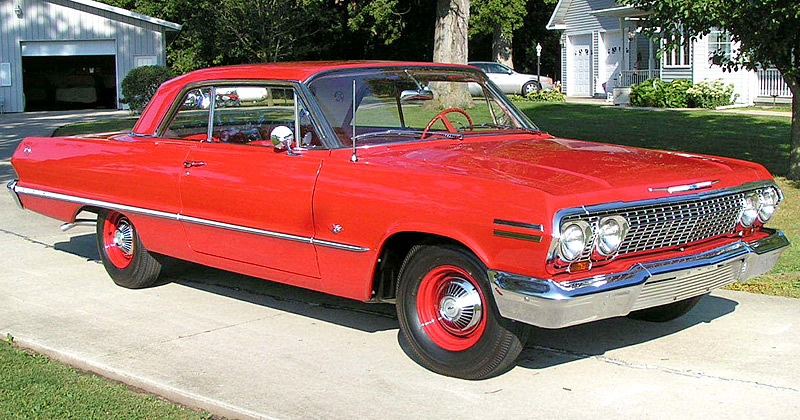 Here's an interesting survivor car, a 1963 Chevrolet Impala Sports Coupe that has done just 26,000 miles in its life and has been very well cared for. The Ember Red paint is completely original with no sign of lacquer checking.

It's clear that the original owner was determined to preserve this car right from the beginning. This isn't just some car that happened to end up doing low miles. It was kept in a heated garage all its life and the original owner even covered up the garage windows he'd previously had a bad experience with the sun fading his Corvair seats.

He didn't even drive it to work because it would have to sit in the sun all day. It was only caught in the rain once when his brother borrowed it and even then he hurried home.

Maybe some would say that that was all a little obsessive, but it means a stunning piece of history has been well-preserved. Anyone can pay to have a car restored but, like they say, it's only original once.

The interior is all-original. Even the carpet is the one it left the factory with. Note also the factory fitted dash tachometer. The engine and engine bay are the only things that have been freshened up. It's still the original 327 cubic inch Turbo-Fire engine that out puts 300 horsepower. This is paired up with a 4-speed manual transmission. A combination that would have cost $479 when the car was ordered by the original owner. Prices started at $2,667 for an Impala Sport Coupe in the 1963 model year. This got you 230 cubic inch six-cylinder Turbo-Thrift engine. Another $107 would get you the base V8 - a 283 cubic inch Turbo-Fire V8 that output 195 horsepower. Both came with a 3-speed manual transmission as standard.