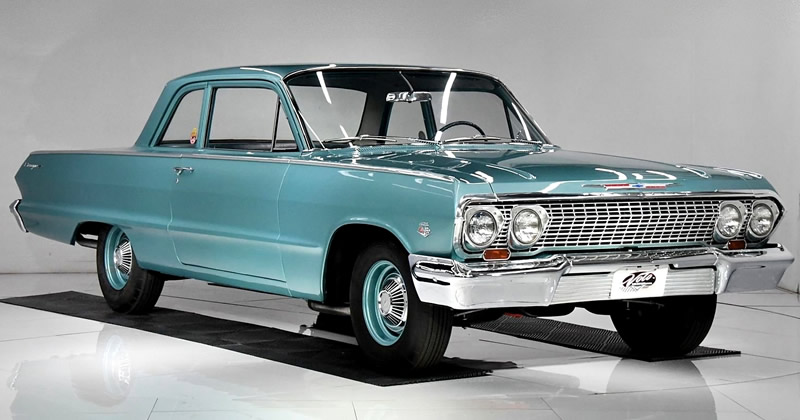 The recipe for a sleeper is simple. Pop back to 1963 and order a base model Biscayne but don’t bother with the standard six cylinder, just go for the biggest and most powerful engine Chevy had available at the time – the 425 horsepower 409 cubic inch V8.

The Biscayne was Chevrolet’s best value full-size car. It was introduced in 1958 and was available in the USA until 1972 (Canada until 1975).

This car is painted in its original Azure Aqua which is one of our favorite colors of the era.

The only clue that something special is going on under that hood is the front fender badges.

Full-size Chevrolets received a restyle for 1963 to give them a more luxurious look. Even though the Biscayne was relatively basic it looks great.

The frame off restoration done 15 years ago on this 72,686 mile car still looks amazing.

Under the hood sits the mighty 409 – it’s factory stock and has an aluminum intake and dual 4-barrel carburetors and solid lifters. It’s a combination that generates 425 horsepower.

If you wanted a Biscayne 2-door sedan back in 1963, prices started at $2,322 which would have come equipped with the base six-cylinder engine. The original owner of this car paid an additional $720 for the 409 and 4-speed manual transmission combination.

This 409 equipped ’63 Biscayne is currently for sale on eBay. (follow the link for even more photos)