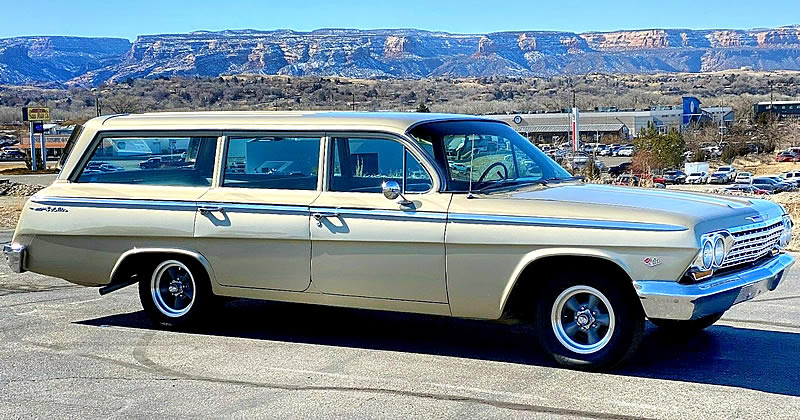 This 1962 Chevy Bel Air Station Wagon is sure to bring back family memories for many people. Being transported in a wagon by Mom is something that many people remember very fondly.

Once the top of the line for Chevrolet, the Bel Air series had been the mid-level line-up since the Impala became the king in 1959. Still, it was still moderately well appointed and gained several extras over the Biscayne below it. There were carpets rather than rubber matting, a full-length upper bodyside molding, foam cushion seating and arm rests at the rear in addition to the front and higher grade cloth and vinyl was used for the interiors.

Cars like this don't come around very often. This nicely optioned, Fawn Beige (code 920) beauty is a barn find with just 28,125 miles on the odometer. Having been built originally in Van Nuys, California it was sold new in Grand Junction, Colorado and remained in Colorado its entire life. It was used on a farm until it was retired, under cover, in the 1970s. This would explain the rather low mileage on this Bel Air with the dry climate helping to keep the car in the condition it is today.

Station wagons tended to get a rough ride in life with kids, pets and generally being packed with stuff that needed hauling around. They were real workhorses so it's always great so see a survivor.

Ironically enough it has ended up for sale with that same dealer that sold it new back in 1962. Power comes from a 327 cubic inch H.O. V8 providing 300 horsepower. This is paired with a 2-speed Powerglide automatic transmission. This combination would have cost an additional $444 when the car was ordered. Chevrolet built 187,566 Station Wagons for the 1962 model year. Unfortunately there is no breakdown of figures per series.