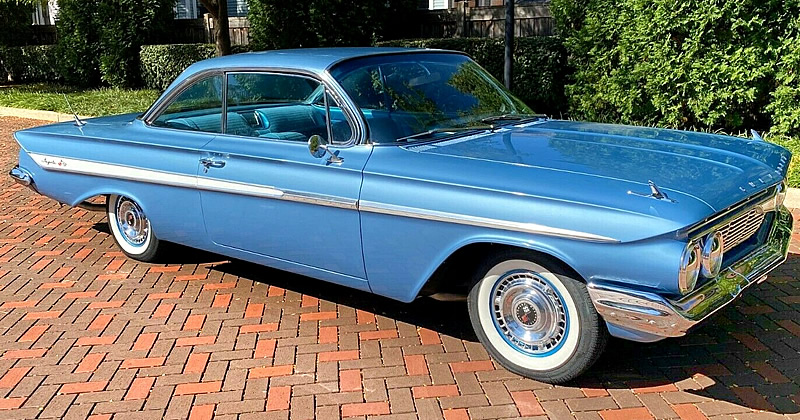 With a complete restyle for 1961 the full-size Chevrolet cars had now well and truly entered the sixties with tailfins pretty much gone. The A-pillars were re-angled removing the dogleg that had been put in place to allow the panoramic wraparound windshield of previous years. Unfortunately it had received complaints as some people found it got in the way during entry and exit of the vehicle.

The body sides were now much simpler and cleaner with a feature side line that ran from the headlamps sloping downwards towards the rear of the car, with an uptick taking it up to the top line of the rear fender. The Bel Air and Impala had bright metal molding to emphasize the line with the Impala’s being wider, fin shaped and used a contrasting color in the inserts.

1961 saw the top-of-the-line Impala now entering its third generation with the Sport Coupes getting the “bubble top” treatment and triple taillights were once again a signature mark reserved just for the Impala.

Buyers had the choice from 15 solid colors with 9 of them being totally new. There were also 10 two-tone combinations available. This Impala is painted in Jewel Blue (code 912) which is particularly striking and one of our personal favorites.

While retaining their 119″ wheelbase, the 1961 full-size Chevrolet cars had trimmed down a little and were an inch and a half shorter and nearly 2 and a half inches narrower. The trim new size was how Chevrolet marketed these new cars. Better to handle and park was highlighted in the sales literature of the time.

Under the hood original Impala buyers could pay an additional $107 for a 283 cubic inch Turbo-Fire V8 Engine producing 230 horsepower rather than have the standard 6-cylinder 145 cubic inch engine. Both came with a 3-speed manual transmission.

Another $199 got you a Powerglide automatic transmission and, if you wanted, air conditioning which would have cost an extra $364 – not a cheap purchase at the time!

The original owner of this Impala actually opted for the more powerful 348 cubic inch V8 – the Turbo Thrust. The solid lifter version put out 280 horsepower and cost $271 extra paired with a 3-speed manual transmission. However, this car also has a 4-speed transmission which was a further $188.

Chevrolet sold 177,969 Impala Sport Coupes during the 1961 model year. Prices started at $2,597 for one with the six cylinder engine with a 3-speed manual transmission.

This ’61 Impala Sport Coupe is currently for sale on eBay. (follow the link for even more photos)