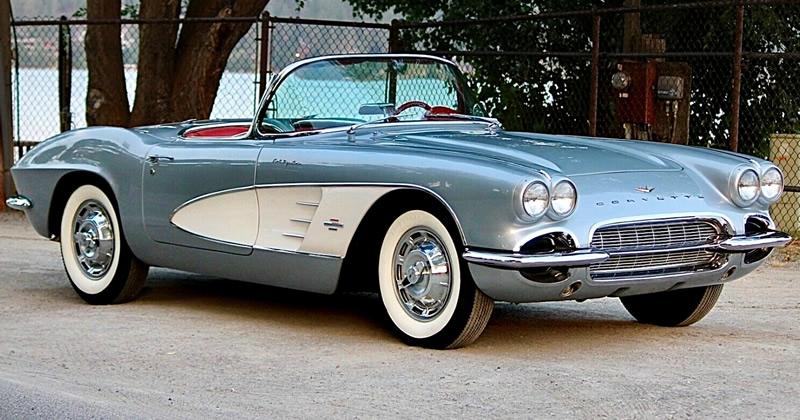 This 1961 Chevrolet Corvette in Sateen Silver with Ermine White coves marks the last time that a tone-tone color scheme would be offered on the ‘Vette. From 1962 it was solid colors all the way! (well until 1978 when it was available with the top and bottom in different colors).

In 1961 the Corvette was restyled with, albeit minor, changes at the front. The grille was now a fine mesh replacing the chunky chrome teeth that were there previously.

The rear end received the most significant change, giving the rear deck a much more sleek look. A look that was dubbed the “ducktail”. There were now two round taillights on each side and the bumpers were revised. Together with the front changes the car now looked less “chrome laden” that it did in the previous 3 years.

Since its introduction in 1953 the Corvette had always been a convertible. It wasn’t until the second generation cars were introduced in 1963 that a Coupe was available.

Note: the steering wheel is the only “incorrect” non-factory item.

Power on this ‘Vette comes from a 283 cubic inch V8 engine with fuel injection and outputting 315 horsepower. This is a desirable option with only 1,462 Corvettes leaving the factory with it that year. It would have cost the original owner an additional $484.

This is paired with a 4-speed manual transmission which was a $183 option over the standard 3-speed. Original buyers could have also opted for the 2-speed Powerglide automatic transmission at $199. Interestingly most original buyers went for the 4-speed which was now encased in aluminum and shaved 15 lbs off the total weight.

Also new for 1961 was the use of an aluminum radiator replacing the previous copper-core one. Not only was it lighter but offered 10% more cooling capacity.

This ’61 Corvette is currently for sale on eBay. (follow the link for even more photos)