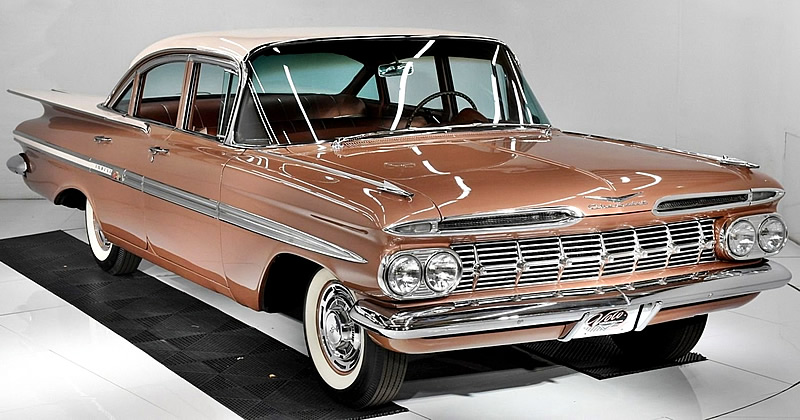 This 1959 Chevrolet Impala in Gothic Gold (code 920) was part of Chevrolet’s all-new slimline design for ’59. Bodies were wider and had more room and, with the taller wraparound windshield provided more light and visibility.

What is very special about this particular Impala is that it has done under 3 miles in its entire lifetime! This is one of the cars from the Lambrecht Chevrolet collection. Ray Lambrecht who ran a Chevrolet dealership from 1946-1996 had amassed a huge collection of trade-ins and new cars that were never sold.

The unfortunate part of the story is many of the cars were just not looked after in the way that you would have hoped they would have been cared for. This car and many others were removed from a building that’s roof had collapsed and left outside for many decades. So, what you see here is a car that has covered so few miles but was still subjected to a full restoration – fortunately with a solid foundation.

At the rear of the Impala we can see the new, and very unique, batwing style tail fins and the cat’s-eye / teardrop style taillights introduced that year. These were probably the most identifiable feature of the 1959 Chevrolet models and nothing quite like it had been seen before.

1959 saw Impala become its own series. When it was introduced in 1958 it was top of the Bel Air line-up.

Inside there a tri-tone nylon and vinyl interior and a dashboard that had a brand new look for 1959.

The instruments were now round and were praised for their readability and were a drastic improvement over the 1958 models that were criticized for their poor legibility.

Some Available Chevrolet Impala Options in 1959

A 3-speed manual transmission was standard on full-size Chevrolets and it cost a further $199 if you wanted a Powerglide automatic transmission.

Chevrolet sold 110,500 Impala 4-door sedans for the 1959 model year. This car was built in the Kansas City, MO assembly plant. Prices started at $2,710 for the base 283 cubic inch Turbo-Fire V8 mentioned above.

This ’59 Chevy Impala is currently for sale on eBay. (follow the link for even more photos and details about the story)