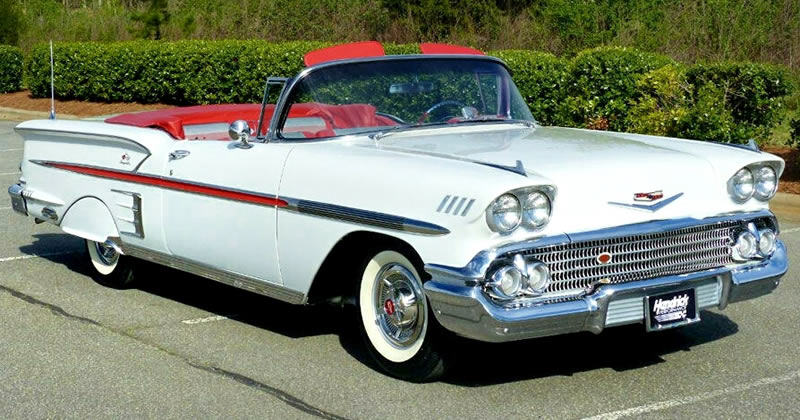 In 1958 the Bel Air Series was top-of-the-line for Chevrolet with the Impala the brand new model within that series (although Bel Air doesn't appear anywhere on the car), it was even more richly appointed.  This 1958 Chevrolet Bel Air Impala Convertible shows you just how nice they are.

Chevrolets had been completely redesigned for '58 and the body style lasted only one year before another complete revamp for 1959. They were longer, wider and lower than 1957. Gone too were the tailfins and replaced with the sculptured 'Gull-wing' styling.

The Bel Air has a spear shaped molding along almost the full length of the car. There are four chevrons at the front of the front fenders, four short, vertical strips on the lower rear fender bulge, fender ornaments on the front fenders and a unique roofline with a vent above the rear window.

Impalas had even more trim including Impala script and crossed-flag emblems at the front of the rear coving, chrome plated dummy air scoops in front of the rear wheelwells, ribbed body sill panels and triple taillamps. Other models had just two taillights with the station wagons only having one.

Note the triple taillights which was an Impala only feature

This car looks great in its Snowcrest White paint and goes well with the Gray, Black and Red textured fabric and vinyl interior. Impala features include the competition style two-spoke deep hub steering wheel with impala medallion, Impala script on the dashboard and the rear speaker grille found in the seatback dip in the center of the rear seats. Power steering adds to the pleasure of driving this great car. It is also fitted with a 348 Turbo-Thrust V8 engine outputting 250 horsepower. This is paired with the standard 3-speed manual transmission. This combination would have cost an additional $166 back in the day.

Some available Chevrolet options in 1958

Can it really be a Bel Air and Impala?

When we first posted this on Facebook it caused a bit of a stir. We had comments like:

That is a Impala it can't be both

I owned a 1958 Impala for 15 years, and NO WHERE on the car, owners manual, or bill of sale did it say Belair. It was a completely different car; tail lights, quarter panels, trunk lid, interior, and front fender and side trim.

So, not everyone was convinced. But that first year the Impala really was the top of the Bel Air lineup.

This is part of the original Chevrolet brochure highlighting the new Bel Air Impala cars for 1958. Part of the Impala section in the Chevrolet brochure

And here's an original Chevrolet promo film - have a listen at the 2 minute 46 second mark where they introduce the Bel Air luxury series that includes the Impala.

In 1959 the Impala then became its own series but that first year despite differences like 3 taillights at the rear instead of two, it still technically belonged to the Bel Air Series - it was just more luxurious.

Hopefully that original material is enough to convince you guys that it is technically correct. That's the great thing about this hobby, there are always new things to learn.

This 58 Impala Convertible is currently for sale on eBay. (follow the link for even more photos﻿)