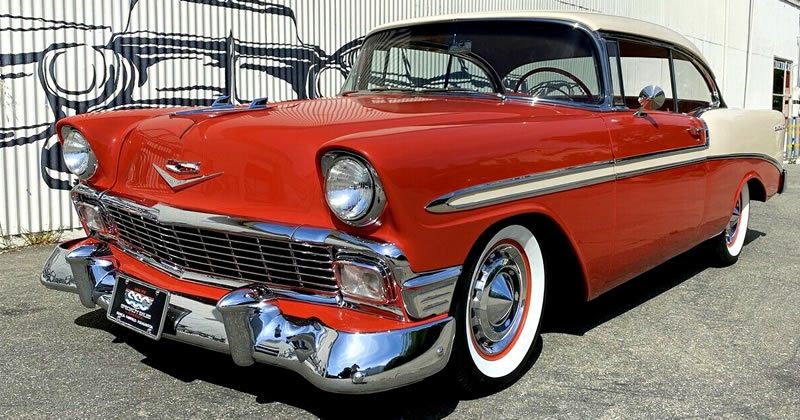 The Hot One’s Even Hotter – the Chevrolet sales literature told us when the new fresh and frisky ’56 Chevrolets were launched. Following on from the amazingly popular ’55 Chevy there was now an even more powerful V8 and the new cars sported a mild face-lift.

There was now a full-width grille, revised bumpers and a new V emblem on the hood now revealed there was a V8 under there.

The side trim now ran the full length of the car, as we can see on this 1956 Chevrolet Sport Coupe (2 door hardtop). At the rear of the car it appeared to sweep back giving it the look of motion. Under the left taillight was a concealed gas filler.

Inside this Chevy we find a red vinyl and beige pattern cloth interior which was one of five combinations available for the Bel Air Sport Coupe and Sedan.

When ordering one of these when new, you could opt for a little more life in your V8, by ordering the 265 cubic inch Super Turbo-Fire with “Power Pack”. This was an extra $35 over the price of the standard 265 V8 and offered a special intake manifold, higher-lift camshaft, a 4-barrel carburetor, 9.25:1 compression and about 35 more horsepower.

For those that wanted an automatic transmission they could order a Powerglide for a further $189.

This particular Bel Air is now running a later 350 cubic inch small block V8. This is topped by an intake manifold and dual carburetors from an early Corvette.

This ’56 Chevy Bel Air is currently for sale on eBay. (follow the link for even more photos)