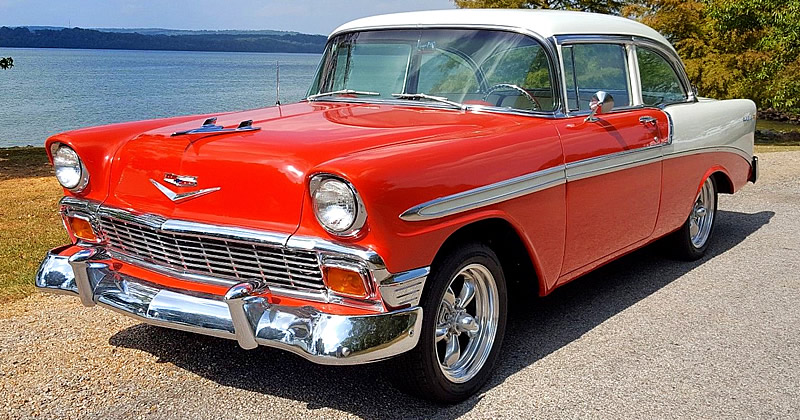 It's not often we post cars that have been modified but this 1956 Chevrolet Bel Air 2-door sedan looks great and the visual changes are fairly mild.

Of the Tri-Chevy's the 1956 if perhaps the least popular year. However, it's actually one of our favorite cars - PERIOD! The shape is just perfect. For us it has to be one of the nicest fifties cars ever made. From the front grille and headlight brows to the nicely formed rear with hidden gas filler under the taillight, it's a winning combination.

It's a car that particularly suits two-tone paint with side-spear running down the center of the car, and taking the upper color with them, looks amazing (admittedly that only Bel Air's had this "Special Two Toning" as they are the only ones with that trim). Under the hood things are a little different too. Instead of the 235 six cylinder or 265 cubic inch V8 that would have been there originally, there is a newer LT1 V8 (Chevrolet still, of course!). This is paired with a 6-speed manual transmission. Fitted with a Chevy LT1 engine

This '56 Chevy is currently for sale on eBay. (follow the link for even more photos﻿)