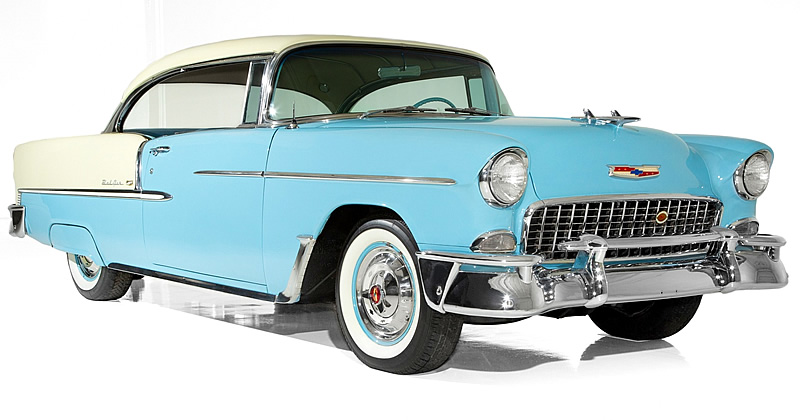 New Look! New Life! New Everything! This 1955 Chevrolet Bel Air Sport Coupe was part of a major restyle and overhaul for Chevy cars. They were proud of what they had produced and shouted about it in all of their promotional material. It was a beautiful car and the public loved it.

Chevrolet was really was all-new for 1955 and it made a BIG impact. Car manufacturers were scrambling to fit the new wraparound windshields this year and Chevrolet incorporated it with style. The body design really suited the surge in demand for two-tone color schemes. Twenty Two two-tone and fifteen solid color paint schemes were available that year.

Chevrolet introduced V8 engines this year too along with 12 volt electrics to power all the extra accessories the modern motorist was demanding. The rear view of this India Ivory over Skyline Blue Bel Air shows you the V8 emblems indicating the engine choice fitted to the car.

Thanks to a great design directed by Harley Earl, there was no doubt Chevrolet had a hit on their hands, beating Ford by 250,000 cars for the 1955 model year. Not only that but on November 23rd, 1954 which was towards the start of the model year, General Motors produced their 50-millionth car which was a specially produced Gold trim Bel Air hardtop.

The 1955 line-up consisted of three series. The One-Fifty, Two-Ten and the Bel Air. The latter sat at the top of the tree with much richer appointments.

The two-tone theme extended into the interior with this fabulous looking red and white interior. The Bel Air Sport Coupe came with a choice of five different vinyl and pattern cloth combinations.

1955 saw a brand new instrument panel and twin cover dashboard with a bright trim panel that ran the length of it. The glove box is mounted centrally. Gauges were displayed in a fan shaped housing with the automatic transmission selector displayed at the base of it.

Power comes from the factory 265 cubic inch Turbo-Fire V8 with 2-barrel carburetor producing 162 horsepower. This is paired with a Powerglide automatic transmission – a $178 option replacing the standard 3-speed manual.

This ’55 Chevy Bel Air Sport Coupe is currently for sale on eBay. (follow the link for even more photos)