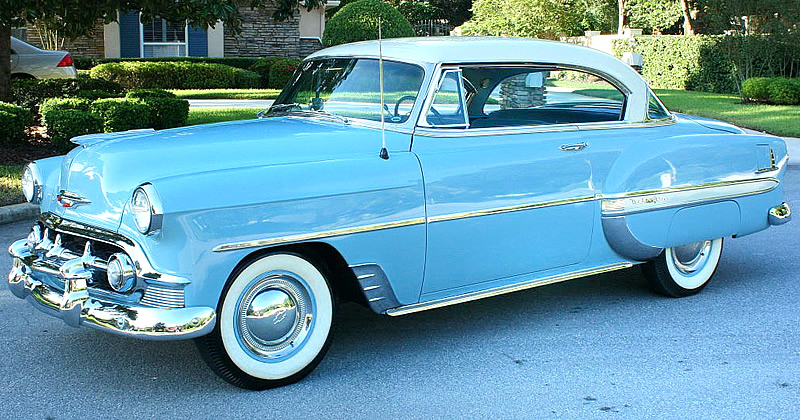 "Startlingly New! Wonderfully Different!" is how Chevrolet described the new models for '53. This 1953 Bel Air 2-door Sports Coupe in India Ivory over Horizon Blue paint (code 510) with blue vinyl and cloth interior shows us the new look for that year. The new, redesigned look for '53 looked fresh and exciting compared with the models that had served from 1949-52.

The reality was it wasn't a totally new car and shared some internal parts and the chassis was the same. Looks wise there was a definite nod in the direction of its predecessor. Nevertheless it was a move in the right direction.

Bel Air now indicated the level of trim rather than a body style as it had previously, and it was top-of-the-line! Standard features included; rear fender skirts, chrome gravel shield and rocker panel trim, front and rear floor carpet (the 150 and 210 rubber matting), twin sun visors, two-tone cloth upholstery.

More distinctive, more glamorous than ever! The beautiful, new upholstery harmonizes with a variety of solid colors and two-tone combinations, is how Chevrolet described the new interiors in the Bel Air. It is believed that this car has spent its whole life in sunny Florida and has done only about 47,000 miles since it was new.

Power comes from a 115 horsepower, 235 inline six paired with a powerglide automatic transmission. The latter would have cost the original owner of this car an additional $178 as it came standard with a 3-speed manual.

1953 saw the introduction of one-piece curved windshields. Previously they were flat and made from two pieces and joined in the center.

SOME AVAILABLE CHEVROLET OPTIONS IN 1953

This Chevy is currently for sale on eB﻿﻿a﻿﻿﻿﻿y. (follow the link for even more photos﻿)