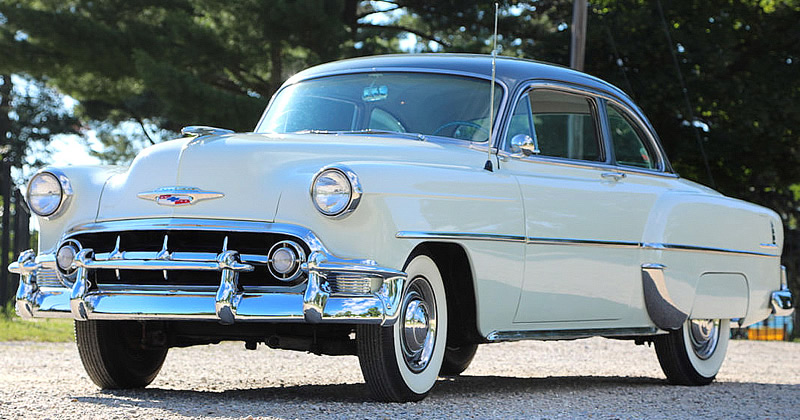 The 1953 Chevrolet’s had a new, more powerful engines and a redesigned body. The new cars looked fresher and more modern than the somewhat outdated 1949-52 models. They did however have more than a passing resemblance to their predecessors.

The Series’ names had been changed and this 1953 Chevy Two-Ten Club Coupe was sandwiched between the entry level One-Fifty and the better appointed Bel Air.

While the Two-Ten didn’t quite match up in terms of side decorations with the Bel Air the two-tone paint still made these cars look special.

Also new for ’53 were one-piece curved windshields which really helped the new cars look more modern. It was also the year that power steering was first available on Chevrolet’s – something that was previously reserved for more luxurious cars.

Inside the Two-Ten enjoyed cloth upholstery with this car benefiting from a $65 optional push-button AM radio. Also present in the center is the optional tissue dispenser.

Under the hood is the 115 horsepower “Blue Flame” six, 235 cubic inch engine