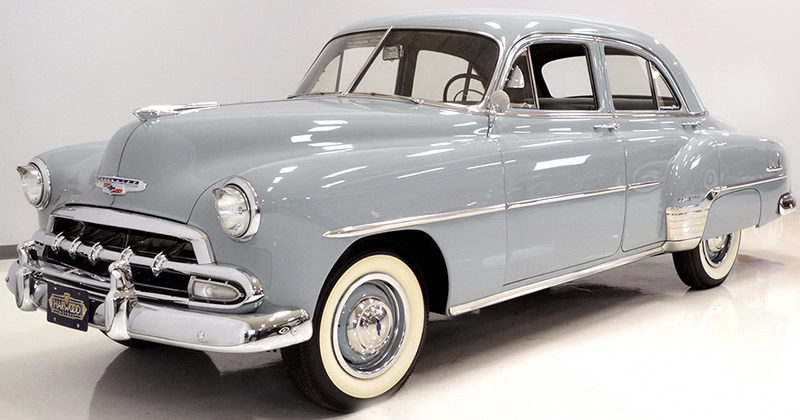 This 1952 Chevrolet Deluxe Styleline 4-door sedan is a very special and rare car. Not because they didn't make many - there were over 827,000 Chevrolets made in 1952 and nearly 320,000 of those were 4-door Stylelines - but because it has a particularly low mileage.

This car has just 1,506 miles on the odometer. Yes, you read that correctly. Just one thousand, five-hundred and six ORIGINAL miles.

Clearly this car has seen very little use. It has however, had a repaint in its original Twilight Blue (code 477). Quite why it had this repaint with such low miles is anyone's guess. Perhaps time wasn't so kind to the paint and it didn't live up to the amazing interior.

One could wonder if it should actually be 101,506 miles. However, the wear just doesn't seem to add up to that sort of mileage. All the chrome, brightwork, emblems etc appear to be all original and just the right amount of ageing. All those moving parts feel tight, the suspension feels taut and even he window cranks feel new without a hint of sloppiness.

As the vendor says, this is either all original or someone has spent over $100,000, leaving some bits of wear and not even touching the engine bay. That sort of thing just doesn't happen and certainly on a 1952 Chevrolet Sedan.

The seats are original in Chevron cloth with Dark Blue broadcloth (code 212) and showing just light signs of wear. The dash and instruments are in amazing condition. You can see the heater / defroster controls (ivory plastic sliders) meaning this car is equipped with the $36 option. Remember, heating was a luxury you paid extra for then! This car is equipped with PowerGlide - this was more than an automatic transmission alone. It was a complete power team with uprated engine to match. This meant a special 235 cubic inch, 105 horsepower engine to go with the automatic transmission rather than the standard 216 cubic inch engine rated at only 92 horsepower. This was denoted by special POWERGLIDE script on the deck lid. For Chevrolet this was the fourth restyle after the big, post-war revamp of 1949. There was a new grille with five, equally spaced vertical bars. These were soon to be known as Chevrolet "teeth". Note the POWERGLIDE script on the rear deck

Deluxe cars benefited from side moldings running from the front of the rear wheel to just before the rear fender, bright metal gravel guards on the rear fender pontoons (with further chrome trim extending to the back of the fender) and brightwork around the windshield and window reveals. Inside there was a two-spoke steering wheel with horn ring, two-tone instrument panel and twin sun visors.

Chevrolet built 319,736 Deluxe Styleline 4-door sedans for the 1952 model year at a base price of $1,749. It was clearly a great seller and competed well against cars like Ford's Customline, Plymouth's Concord and the Studebaker Champion - all cars in the same price field.

This was the last year the name Special or Deluxe was used - the following year they become the 150 and 210 series respectively.