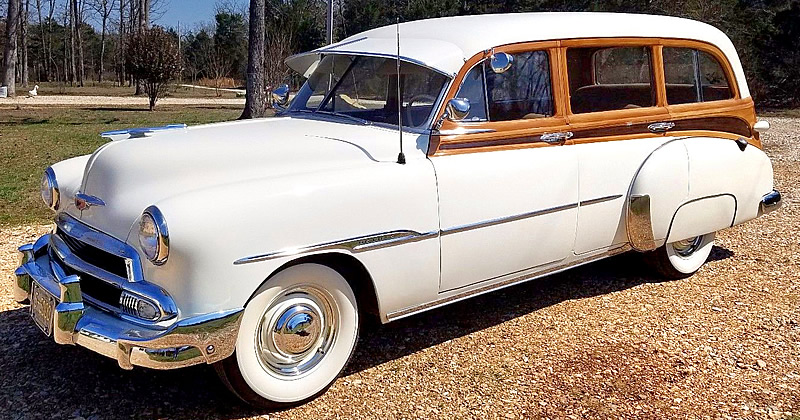 This 1951 Chevrolet Styleline Deluxe Station Wagon has only just over 56,000 miles on the odometer. The story goes that it was taken in trade for some work done right back in the 1960s.  With no real use for it the Chevy was parked up until 2001 work when a partial restoration was undertaken.

Since 1950 these wagons were made from all-steel construction, with simulated wood effect, having dropped the real wood previously used.  As the original sales literature stated, “it combines the smartness and  distinction of a wood-grained finish with the strength and safety of an all-steel body. This led these wagons to be affectionately called the ‘Tin Woody’.

With an extra row of seats in the back, the station wagon could comfortably seat 8 adults. If extra space was required then the back row could easily be removed giving lots of cargo space.

The station wagon was unique in that the interior used a tan, simulated pigskin leather upholstery. Wood panels were also used on the doors and sidewalls.

Under the hood there is a 216.5 cubic inch inline six engine that outputs 92 horsepower.

Chevrolet sold 23,586 Styleline Deluxe Station Wagons for the 1951 model year. It was their most expensive car at a base price of $2,191 which was $161 more than even the convertible in the same series.