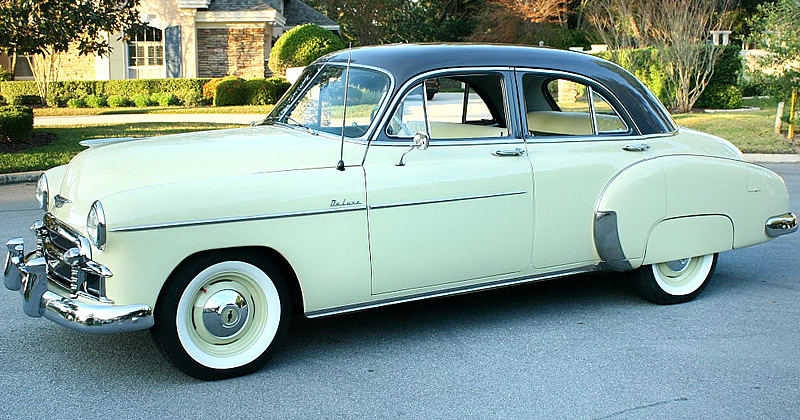 Finer than ever for ’50! Inside… Outside… All the way through! was how Chevrolet described their new cars for 1950. In reality there were just minor changes following the major revamp of 1949. These changes included a new grille design, revised hood and trunk emblems and a new hood ornament.

They offered two series that year: the Special and the top-of-the-line DeLuxe.  The latter was split into the Styleline and Fleetline sub-series. DeLuxe sales outsold the Special models by quite a wide margin.

This popular Styline DeLuxe four door sedan is shown in Falcon Gray metallic over Moonlight Cream – in our opinion a great classic combination that really reflects the era.

The vinyl and cloth interior matches the the exterior.

Under the hood sits a 236 cubic inch Blue Flame six engine that provides 105 horsepower and is paired with a 3-speed manual transmission.

Options on this car include an AM radio costing $64 and a heater / defroster that would have been an additional $36.

The original cost of a Styleline Deluxe sedan in 1950 would have been $1,529 and proved to be Chevrolet’s most popular model that year with them selling 316,412 of them.

It was actually a good year for most automobile manufacturers and Chevrolet was no exception with them selling 1,371,535 units during the 1950 model year.