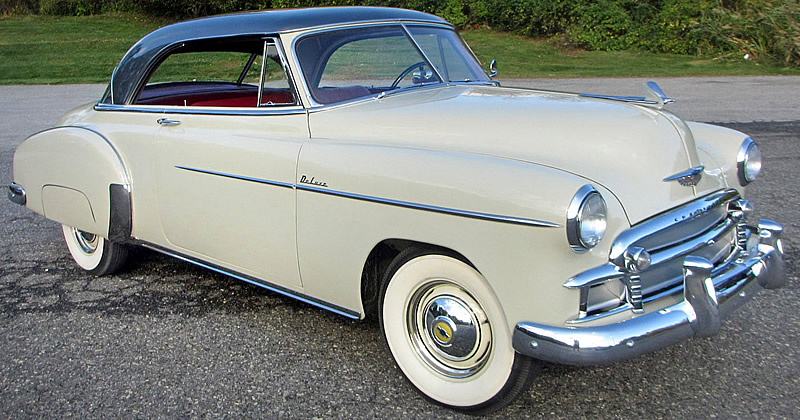 This is how the famous Chevrolet Bel Air began. Life started within the Styline DeLuxe Series and was the introduction of an exciting new body style that was going to prove popular through the fifties - the hardtop convertible!

Despite the fact that these cars didn't actually convert into an open top car, they gave the impression of an open feel like that of a convertible. This was achieved using door and quarter windows that rolled down out of sight with no door posts to spoil the view. This feeling was enhanced using a wraparound rear window that came round almost to the quarter window.

The was another first this year - the arrival of the first fully automatic transmission in the low price field. This 1950 Chevrolet Bel Air was ordered with Powerglide two-speed automatic transmission and was easily identified with the "POWER GLIDE" displayed proudly on the trunk lid. It was available for an additional $159. This Falcon Gray over Moonlight Cream Chevy is all the more special as it has covered only 10,000 miles.

The interior is original and in fantastic condition. The Bel Air came with gray pile cord with green, blue or red leather trim. Both the convertible and Bel Air featured black finish on the steering wheel and on the outer edges of the spokes. Under the hood sits a 235 cubic inch, six cylinder engine that outputs 105 horsepower. Sales were pretty good and it came close to selling as many as the Sport Coupe despite being around $250 more expensive. In fact, the Bel Air was only about $100 less than the convertible.

Chevrolet had managed to beat Ford with this new body style. They weren't to have anything similar until they released their Victoria the following year.

The hardtop was to redefine what we would expect of sport closed models and was here to stay.