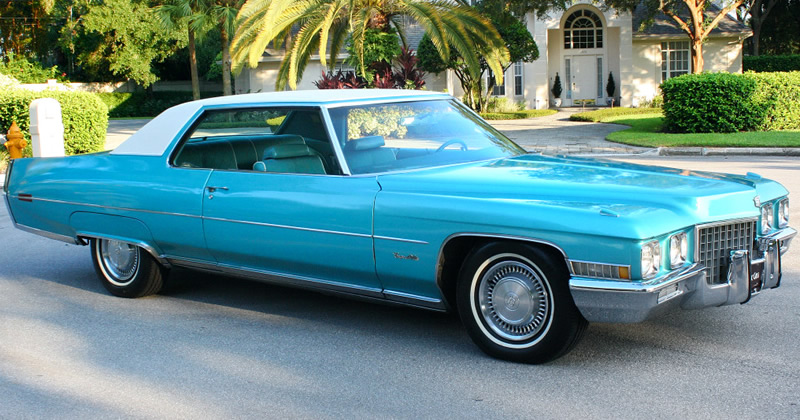 Love or hate cars from the seventies, they certainly had a look that made them stand out. If you are going to get a car from this era then you might as well have one that gets you noticed. This 1971 Cadillac Coupe de Ville in the original color, a very striking Zodiac Blue paint will certainly do the job.

Cadillac were completely restyled for the 1971 model year. Not only that but the convertible and Sedan de Ville 4-door were now gone from the de Ville line-up. There was still a sedan available but it was a Hardtop Sedan (without the B-pillar).

At the rear, the taillamps were quite similar to the previous year, albeit without the chrome dividing bar. Backup lamps were once again mounted horizontally in the bumper.

The exterior is matched inside with a superb Dubar cloth interior in Medium Aqua – one of 5 colors available. Also available for 1971 were 3 colors of Debonaire cloth with leather and 12 different colored Sierra grain leathers were available at extra cost. This is a seventies lounge interior at its best!

Power comes from a 472 cubic inch V8 (that’s 7.7 liters!) producing 375 horsepower. It was one of the biggest that Cadillac produced. The engine was perfectly suited for running on leaded fuel or the “new” no lead gasoline. It is paired with a Turbo-Hydramatic 400 3-speed automatic transmission. It was a great combination giving a very smooth ride and they are very durable.

Competition would have come from cars like the Chrysler Imperial and Lincoln Continental – although both were a little more expensive than the Cadillac.

Important to note that while Cadillac experienced relatively low sales this year, a nationwide United Auto Workers dispute lasting 67 days is a major contributor to the reduced production.