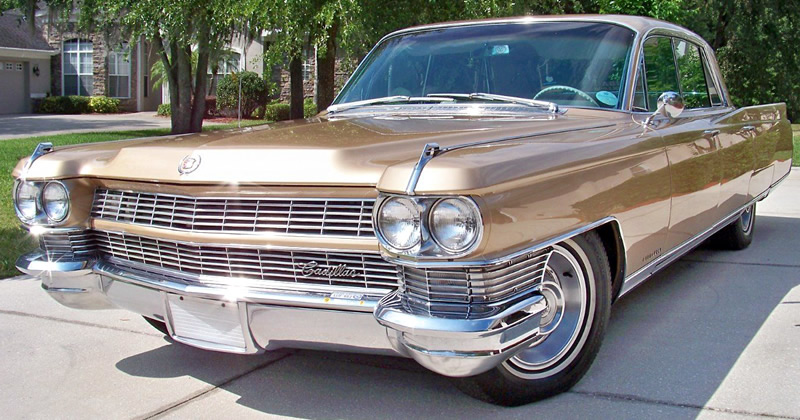 Offering even more luxury and costing around $1,000 more than a four-door from the 62 Series, this 1964 Cadillac Sixty Special Fleetwood was an even more up-market car. The sales literature told us that the Fleetwood was in a class by itself in its luxury and magnificence.

The Fleetwood had no mid-level side trim that was found on the Sixty-Two series. What it did have was a broad rocker molding that ran the length of the car. It also used African Baku wood paneling to accent the interior.

As you'd expect from Cadillac it has power windows, power brakes, power steering and the front bench seat had powered adjustment. It also has optional Automatic Climate Control air conditioning.

There weren't that many changes to the look of Cadillacs from 1963. The grille was made simpler and the horizontal bar in the center of it was now painted with the body color.

Power comes from the, new for 1964, 429 cubic inch V8 producing 340 horsepower. This engine was basically the previous 390 V8 with an increased bore and stroke. This is paired with the rather smooth Turbo Hydra-Matic automatic transmission with had also had a revamp this year.

There really wasn't much competition for a car like this. The closest rival would have been a car like the Imperial LeBaron.

Cadillac produced 14,550 Series Sixty Special Fleetwood cars for the 1964 model year. They were only available as a 4-door Hardtop Sedan with a base price of $6,388. Air conditioning on this car was an option costing an additional $495.

Check it out on Amazon
Share1K
Tweet
Pin137
1K Shares