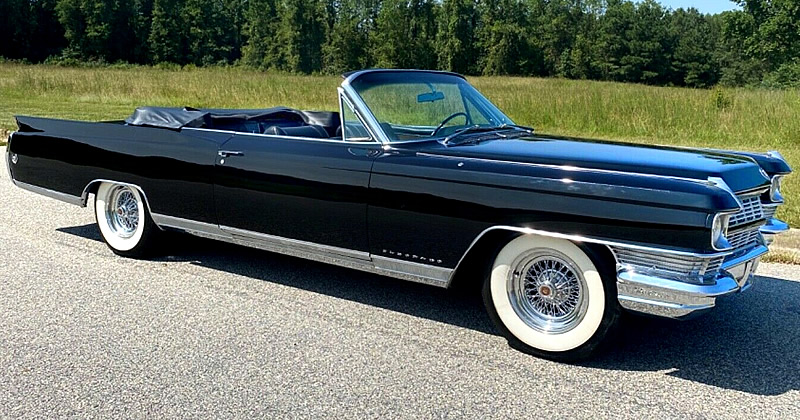 Fins were getting smaller and 1964 was the last year they would appear on a Cadillac.  It actually meant a sleeker, more clean look resulting in a beautiful car.  You can see those lines on this 1964 Cadillac Eldorado Biarritz convertible in Ebony Black.

With this car not being as flamboyant as Eldorados of the past, it makes this car a much more timeless, refined classic.

Not only were there only 1,870 of these cars ever made but it is believed that the 49,000 miles displaying on the odometer are original. It is likely that there are only around 500 of these care left in existence. Now, that’s got to be something special.

Another visual clue indicating this is an Eldorado Biarritz is the lack of fender skirts.

Cadillac were confident that the Eldorado was the most glamorous car in the world with interiors that used the finest leather in the world. There were eight color choices available and a center console and bucket seats were available for $188.

As you would expect from a luxury car like this the brakes, steering, windows and seats are all powered and were standard features. Even the vent windows are powered!

Cadillac made just 1,870 Eldorado Biarritz Convertibles for 1964 at a base price of $6,630. This was around $1,000 more than the standard convertibles allowing the car to have more luxurious trim and more standard features. You did have to pay for the AM radio though which would have cost the original owner $165 with the rear speaker.

Other extras this car enjoys are: Automatic Climate Control air conditioning at $495 and tilt steering wheel ($48).

This ’64 Cadillac Eldorado is currently for sale on eBay. (follow the link for even more photos)