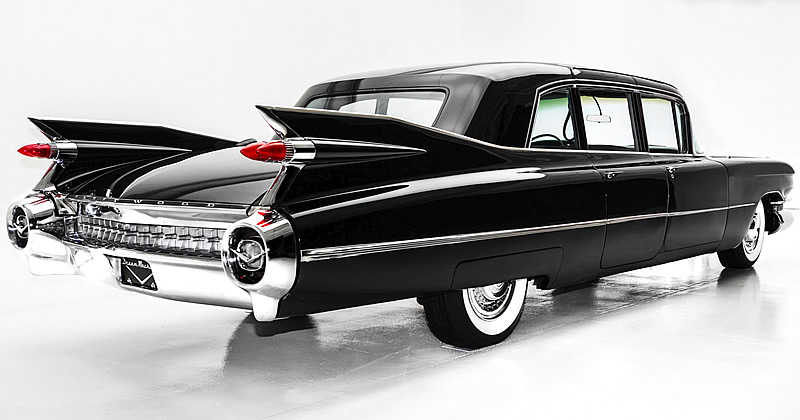 With those same, unmistakable and iconic rear fins with bullet taillights these cars are just under another 20 inches longer. This brings their total length to just over 20 feet!

The Seventy-Five was available as two models. Both 9-passenger. The sedan and limo were identical except the division window found in the latter.

Over 20 feet of luxury

That front end is unmistakably Cadillac! As you'd expect on a Cadillac, power brakes and power steering were standard, as were power windows. The tinted glass on this car would have cost an additional $52 though.

Under the hood is a powerful 390 cubic inch V8 that outputs 325 horsepower. In fact it is the same engine that powers all of the other Cadillacs that year. Also standard is the Hydra-Matic automatic transmission. A great option on this particular Fleetword Limo is the fully functioning air conditioning. Costing $624 when it was new, it was an extra $150 more than the price you'd pay to equip a coupe or sedan.

These 59 Fleetwoods weren't cheap. If you ordered the 4-door limousine when it was new it had a base price of $9,641. To put this in perspective, a Series 62 four-door hardtop that year would have cost $5,080. So the limo was approaching double the cost. A total of 690 Cadillac produced limos were produced for the 1959 model year. The chassis were sold separately achieving over 2,000 sales. These would have become hearses, ambulances and other speciality vehicles.

This 59 Caddy is currently for sale on eBay. (follow the link for even more photos﻿)