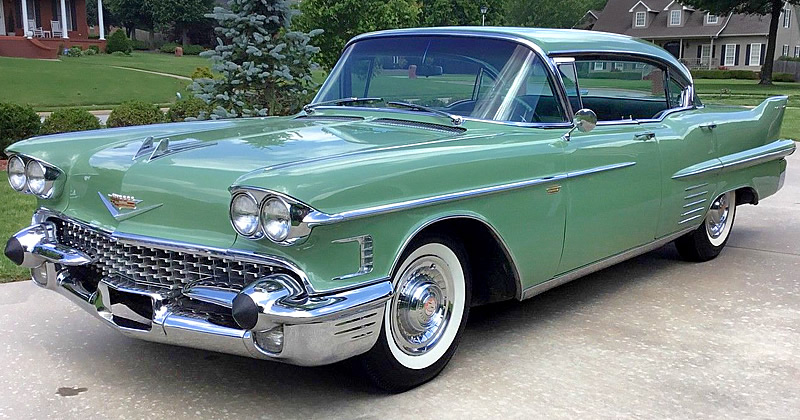 It was 1958 and Cadillac were really entering a period of decadence. Their new cars were basically carryover models but with a lot more glitz on the outside.

The big change was at the front with dual headlights and new bumper and full-width grille assembly. The result was a bulkier looking car.

At the rear the the fins were borrowed from the Eldorado and now more shark-like. The mileage on this 1958 Cadillac Hardtop Sedan sits at just over 48,000 and they are believed to be actual.

It has had one repaint in its original color of Versailes Green Metallic (code 32) but the interior is all original. Under the hood is a 365 cubic inch V8 engine producing 335 horsepower. This is paired with a Hydra-Matic automatic transmission. Both were a standard pairing in all Cadillacs that year except for the Eldorado.

Power steering and power brakes came standard on all Cadillac models. This Caddy also benefits from power operated windows and 6-way seat adjuster costing the original owner $108 and $103 respectively. They also opted to have option R which was the Radio, a signal seeking model with pre-selection and power antenna at $164.

Sales were generally down for most car manufacturers due to the 1958 recession.