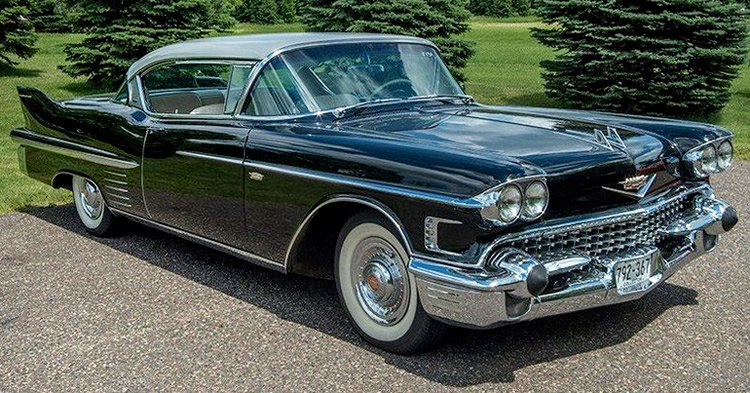 If you want an eye-catching car then this black 1958 Cadillac Coupe de Ville will do the trick! With plenty of chrome complimenting that black finish you'll certainly get some glances.

This was a car that told the world that you had made it. You had arrived - in style!

This particular '58 Caddy looks great in black which sets off nicely against the luxurious Bronze / Black interior. The instrument panel you see here was a completely new design for that year. On the far left of the dash you'll see the Autronic Eye, an automatic headlight dimmer which was a $48 option. The original Cadillac brochure told us that; 'a single glance at the magnificent new interior of the 1958 Coupe de Ville will convince you that this is a masterpiece in luxury'. Power comes from a 365 cubic inch V8 engine connected to a Hydra-Matic Drive automatic transmission. As you'd expect from a Cadillac from this era it has power brakes, power steering, power windows and two-way power front seat adjustment.

Although the 1958 models were basically a carry over from the 1957 models they did have a face lift. The bumper guards were now placed lower in the new, bolder grille full of studs and were positioned closer to the parking lamps.

Shark fins at the rear of the '58 Cadillac

Some available Cadillac options in 1958

Cadillac produced 18,414 Coupe DeVilles for the 1958 model year with a base price of $5,231. Sales were down that year with the nationwide recession playing a big role in that.

For some the looks went a bit over-the-top but what Cadillac did manage to produce was a much more reliable car with much improved mechanicals.