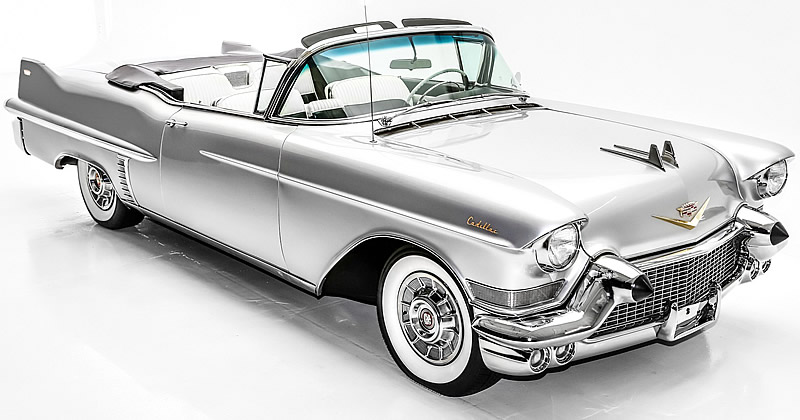 Imagine yourself cruising in this Silver 1957 Cadillac Series Sixty-Two Convertible. The '57 was arguably one of the best looking fifties Cadillac and a real credit to Harley Earl and his team.

Check out those lines

You'll notice the vertical moldings with 7 horizontal windsplits just forward of the rear wheel openings - these are only found on the 62 series.

All Cadillacs for '57 a new tubular-center X frame chassis, that allowed the cars to sit lower, and power brakes and steering were standard. Power windows were standard in the Convertible as was a two-way power seat. The original buyer of this car opted to upgrade to six-way power seats. 1957 saw new front end styling with rubber bumper tips and dual parking laps found in the lower section of the bumper. A dual taillight theme were found across the range. Pointed shark style fins were now seen on the rear fenders. Previously these were only seen on the Eldorado Seville for 1956. There were new fender identifying markings for 1957 with a crest medallion mounted on the rear fender fins on the 62 Series cars.