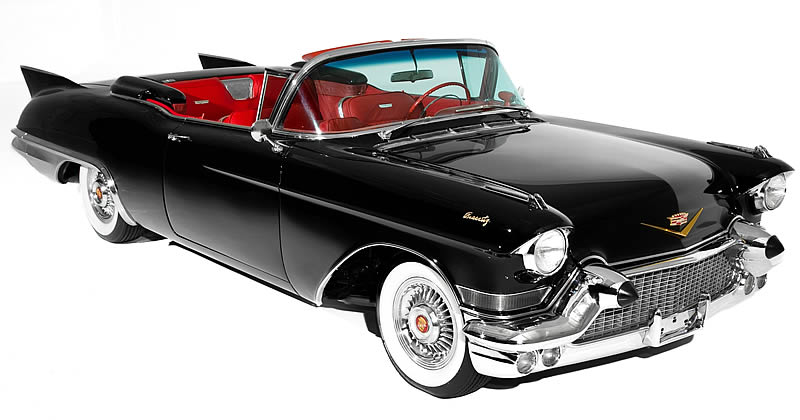 Well here's a car you don't see very often, the luxurious 1957 Cadillac Eldorado Biarritz. It's a very rare car which is hardly surprising as they were very expensive when they were new (and still are obviously) and not that many were made. If you had one back then you had really made it!

Officially part of the Series 62 cars, the Eldorado came in two versions. The Seville, a 2-door hardtop and Biarritz, the name given to the convertible. Both cost exactly the same and were significantly more expensive than the equivalent standard models.

The Eldorado has similar front ends but did not carry hood ornaments. Where they differed the most was at the rear that rounded downwards and the large shark fins that dominated the design.

Inside, the Eldorado enjoyed power windows and power seats which were all-leather. Under the hood is the Cadillac 365 cubic inch V8 engine paired with a Hydra-Matic automatic transmission. Dual carburetors helped provide another 25 horsepower than their ordinary cars, giving a total output of 325 hp. Weighing nearly 5,000 lbs the Eldorado could still keep up with the best of the competition. However, they were very thirsty and expensive to operate. We can't imagine though that the original owners, that paid a premium price for these cars, were particularly worried about this. Costing $7,286 the Eldorado Biarritz was around 40% more expensive than the standard Series 62 convertible and just 1,800 were made. This and the 1958 were the last of the truly distinctive Eldorados and are highly collectible.

To put the original price in perspective, this Caddy convertible cost almost as much as THREE 1957 Chevy Bel Air Convertibles.  Plus this car was also fitted with air conditioning at the factory. That was another $540!

This Eldorado Biarritz is currently for sale on eBay. (follow the link for even more photos﻿)