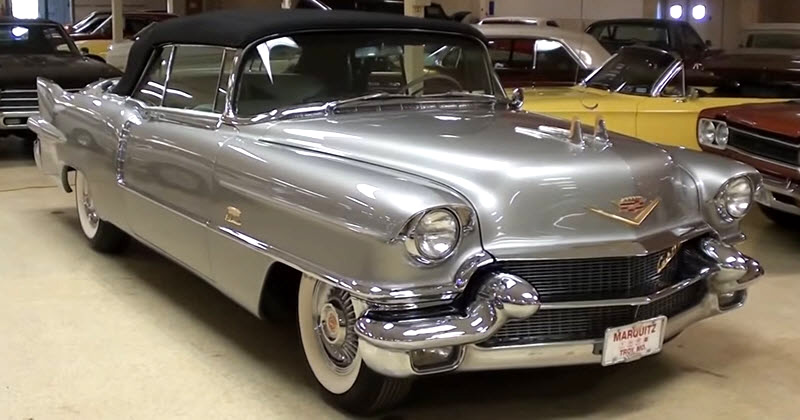 What a stunning 1956 Cadillac Eldorado Biarritz Convertible this is. Presented here in Starlight silver paint with green and white leather trim - not a Cadillac recommended color combination but nevertheless was ordered this way.

Eldorado was a sub series of the Series 62 models and consisted of two cars; the 2-door Hardtop Seville and the Convertible Biarritz you see here. It had been introduced just two years earlier and for those first two years was only designated to the convertible. Apart from the obvious "Eldorado" script on the front fender, they were recognizable against the standard 62 series by the much more pointed rear fender fins (sharkfins) and twin-fin hood ornament.

This car enjoys the luxury of pretty much power everything - steering, brakes, seats, locks, windows and the convertible top are all powered.

An Eldorado Biarritz Convertible would have set you back $6,501 (base price) for the 1956 model year. A standard Series 62 convertible was $4,711. To put those prices into perspective, a 1956 Chevrolet Bel Air Convertible (with V8) would have cost you $2,443. Of course the Cadillac came with a bunch of power goodies as standard whereas they would need to be optioned on the Chevy - but still, that's a chunk of change back then.