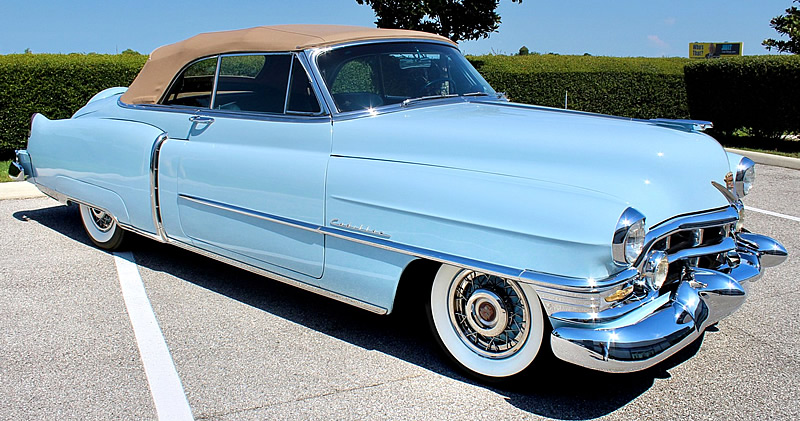 It was Cadillac’s 50th anniversary and they had become a rear symbol of success. Nothing said, “I’ve made it” more than that familiar crest. At twice the price of a Chevrolet, this 1952 Cadillac Series 62 Convertible would have screamed affluence when you drove it out of the showroom.

Surprisingly, while Cadillac promoted their birthday they didn’t really do much with the cars themselves to mark this half-century landmark. There were revisions to the crest ornament and the “V” with the latter cast in Gold trim.

1952 was the first year we saw a through the bumper exhaust – a feature that would become something of a trademark feature on Cadillac cars. Power steering was introduced as an option too. Costing an additional $198 it was fitted to this car.

Power windows were however, standard (convertible and Coupe de Ville only). As too was the self winding clock.  The push-button AM radio you see here cost $102. A signal seeking version was also available at $129.

The Beautiful blue leather interior would have been the height of luxury for the early 1950s.

Power comes from a 331 cubic inch V8 producing 190 horsepower which was up 30 from the previous year. Much of the power increase was due to using a 4-barrel carburetor, replacing the 2-barrel. This is paired with a Hydra-Matic Drive automatic transmission that also received a revamp for this model year.

1952 saw Cadillac win the Motor Trend magazine “Car of the Year” award for the second year running. And it wasn’t just for one model. It was for the entire line!

Interestingly during 1952 there was actually a shortage of whitewall tires for a time due to Korean War cutbacks!

Cadillac built 6,400 convertibles for the 1952 model year at a base price of $4,110. They were all Series 62 cars as no other series offered a convertible.

This ’52 Cadillac is currently for sale on eBay. (follow the link for even more photos)