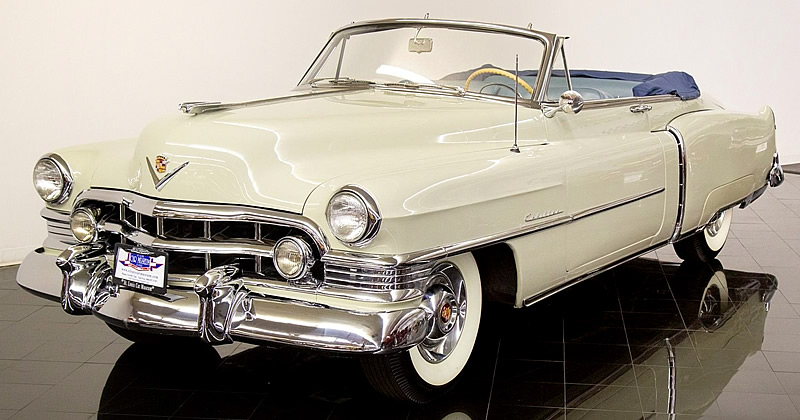 “Distinguished beyond all others!” is how the Cadillac brochure described their new and extensively restyled cars for 1950. They were bigger, longer and lower. You can see those lines in this Series 62 Convertible painted in French Gray.

The Series 62 lineup was more richly appointed than the Series 61 cars and was the only to feature the convertible and Coupe DeVille.

1950 saw the introduction of one-piece windshields across the line-up. The leading edge of the rear fenders had fake air-intake slots made from chrome and the grille was even larger with parking / direction signal lights built right into it.

The tailfin was first introduced on the 1948 Cadillac although they weren’t calling them that. The brochure referred to them as the, “long, low deck and its distinctive rear fender treatment with taillamps in the up-sweep.”

Power comes from a 331 cubic inch V8 producing 160 horsepower. This is paired with Hydra-Matic Drive automatic transmission which was now standard on all Series 61 and Series 60 Special models.

Inside, the interior is two-tone blue leather . The instrument panel is finished in Tudor gray with light tone pattern design insert.

Cadillac produced 6,986 Series 62 Convertibles for the 1950 model year at a base price of $3,654. Interestingly, this model year was the year they sold the one millionth Cadillac. They also managed to exceed 100,000 cars produced in one model year.

This ’50 Cadillac Convertible is currently for sale on eBay. (follow the link for even more photos)