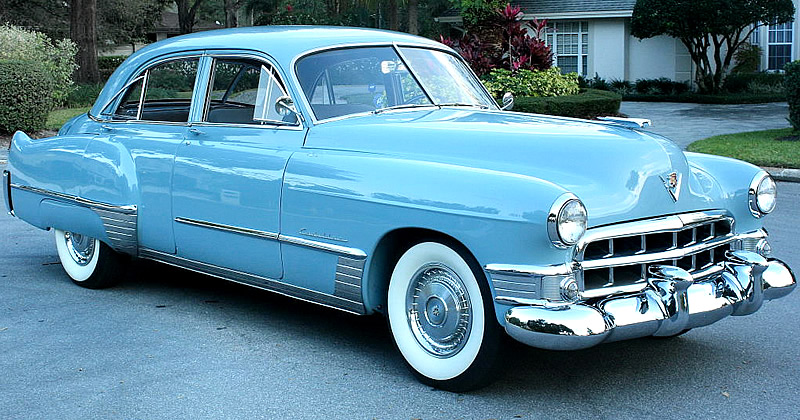 Following on from a major revamp for the 1948 model year, the 1949 Cadillac received minor styling changes. Most notable was the simplified but heavier grille with two-row egg-crate design.

This Series 62 Sedan although restored has done just 71,000 actual miles since it was built.

At the rear we see the second year of the tail fin - there was a lot bigger to come ten years later. A good way to tell the difference between a '48 and '49 Caddy is the lack of chevrons under the taillights of the '49. A giveaway that this is a Series 62 Cadillac are the front fender gravel shields and bright rocker panel moldings - something lower-priced Series 61 cars lacked.

The 1949 Cadillac won the very first Motor Trend "Car of the Year" award.

Inside the interior is classy but fairly simple. 1949 saw a new, horizontal speedometer replacing the previous round design. Despite the "luxury" image of Cadillacs, this was the era where heating was still an option as too was a radio and other power accessories. Under the hood there is Cadillac's 331 cubic inch V8 with a 2-barrel carburetor producing 160 horsepower. It was a brand new overhead valve engine for '49 offering another 10 horsepower over the previous one. It was 200 lbs lighter than its predecessor, could deliver more torque and achieved around 14 percent better gas mileage. This came standard with a 3-speed manual transmission although the original owner of this Caddy opted to pay an additional $200 for a Hydra-Matic automatic transmission.

Overall it was a great year for Cadillac. Sales were up over 78% over 1948 and it was the year the one-millionth Cadillac was produced.

Check it out on Amazon
Share2K
Tweet
Pin172
2K Shares