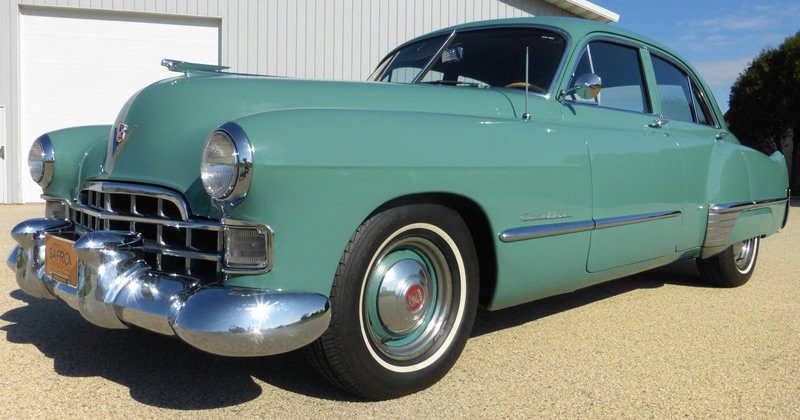 The war was over and it was time for some changes. This 1948 Cadillac Series 61 four-door Sedan in Lucerne Green was fresh and exciting having been stuck with the same body styles for several years. This was the year that tailfins began and was actually the influence of the Lockheed P-38 Lightning fighter plane.

This wasn't the only change. The front fenders were now blended into the body sides rather than the distinctively separate design of previous years. The front, 'eggrate' grille was new and with a much bigger, bulkier looking bumper that wrapped around the sides.

The 61 Series was the base series for Cadillac in 1948. Visually easy to identify over the 62 Series were the lack of stone guards behind the front wheels and the missing trim under the taillights. First year for the 'fins'

Despite still using a two-piece windshield, they were still curved - something that was quite special at the time (it wasn't until 1950 that one-piece windshields would be introduced).

Under the hood is the 346 cubic inch V8 L-head engine producing 150 horsepower - around since 1941, it was its last year before the 331 V8 was introduced. The transmission is the automatic Hydra-Matic which was a $174 option when the car was new. The Series 61 Sedan was 214" long with a wheelbase of 126" and was 78.9" wide. As the Series 62 wheelbase had been moved down from 129" to 126", the two series now looked practically identical save for the trim and various appointments.

It would have competed with the Buick Roadmaster and Packard Deluxe Clipper for sales.

Cadillac produced 5,081 Series 61 four-door sedans for the 1948 model year, with a base price of $2,833. In addition to the Hydra-Matic transmission mentioned above this car is also fitted with the $74 radio option.

The Cadillac Story: The Postwar Years﻿﻿﻿ by Thomas Bonsall

Not just the story of Cadillac, the motor company, but how the motor industry have evolved through the decades.

Check it out on Amazon
Share1K
Tweet
Pin
1K Shares