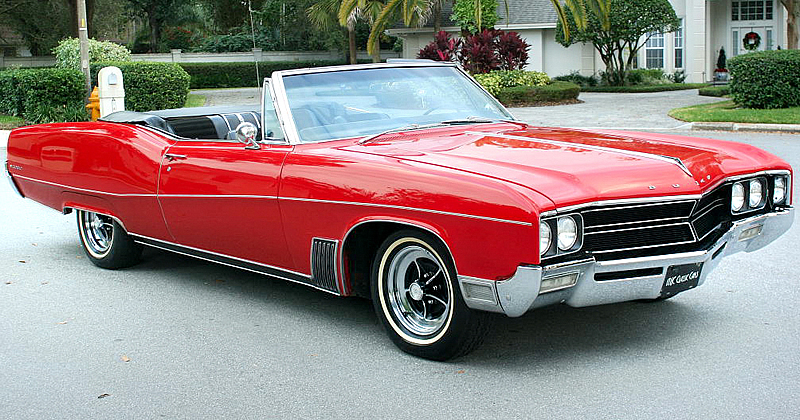 While the mid-size Buicks such as the Special and Skylark received just minor styling treatment in 1967, the full-size models like the Wildcat got a complete makeover.

The Wildcat was Buick's mid-priced car featuring a more open grille and heavier, lower side moldings that originated from simulated air intakes located behind the front wheel opening, setting it apart from the lower priced LeSabre.

This 1967 Buick Wildcat Convertible has seen just two owners in over 50 years. It looks great in Apple Red and sits on original factory Buick road wheels.

Inside cloth and vinyl was standard, the bucket seats and center console you see here were optional. That's the original $268 AM/FM radio in there - even the clock still works! Buick introduced a brand-new engine for 1967 in the form of a 430 cubic inch V8 that produced 360 horsepower. It was 20 hp more powerful than the 425 it replaced and was standard on the Wildcat. Also standard is the Super Turbine 400 automatic transmission that it is paired with. Air conditioning is also fitted to this Wildcat, something that would have cost the original owner a further $421. Other options on this car include: power steering ($111), power brakes ($42) and power windows ($110).

This Buick Wildcat is currently for sale on eBay. (follow the link for even more photos﻿)