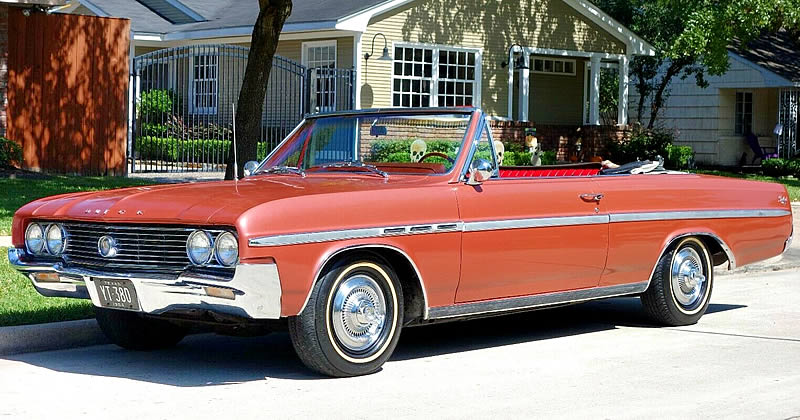 The 1964 Buick Skylark was derived from the Special series and enjoyed better exterior and interior trim. They were Buick’s compact cars of the time despite being just under 17 feet long.

Although the name Skylark had been used back in 1953 and 1954, it was used on the top-of-the-line Roadmaster convertibles. It was brought back for the 1961 model year as a single model within the Special series. For 1962, there were two models; a coupe and a convertible. 1964 saw the addition of a 4-door sedan to the lineup.

Buick advertised the new Skylarks this year as, “It’s bigger, sleeker and smoother in ’64, yet it’s light on its feet as a kitten”. This translated to a 3 inch longer wheelbase and a total length that was 11 inches longer.

Inside, the Skylark was smartly appointed with either cloth and vinyl or, as you see here, all-vinyl which was standard in the convertible.

Under the hood sits the original, numbers matching, 310 Wildcat engine. Despite the name this is actually a 300 cubic inch V8 that outputs 210 horsepower.

This ’64 Skylark is currently for sale on eBay. (follow the link for even more photos)