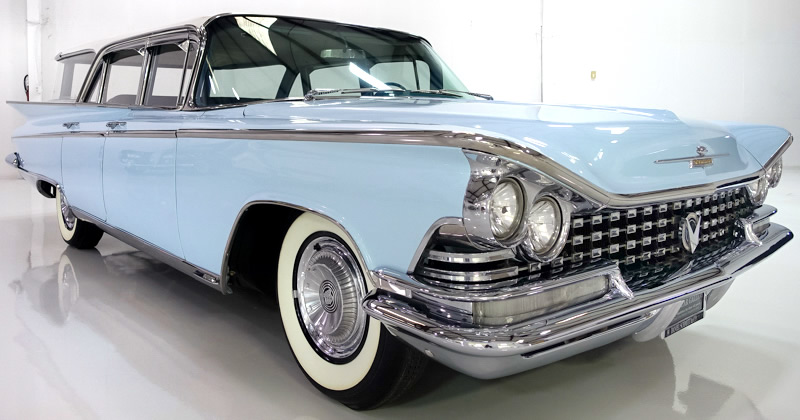 Within reach of two out of three new car buyers exclaimed the Buick sales literature for 1959. It was also a brand new look and brand new names all round. Originally built in the South Gate, California plant, this 1959 Buick LeSabre Station Wagon in Ermine White over Wedgewood Blue shows us that radical and attractive new look.

Despite there being plenty of chrome, especially on the front of the car, it was considerably toned down from the 1958 model year. Clearly the new look proved popular with buyers and Buick saw an overall increase in sales for '59 of 18%.

The portholes that Buick were famous for had now gone (until next year anyway) and the rear of the car now featured Delta-Wing canted fins.

Known as the "Thriftiest Buick", the LeSabre replaced the 'Special' and sat at the base of the line-up. It wasn't loaded with extras but it was still more luxurious than some similarly priced cars. All sharing the look, the next in the Buick line-up for 1959 was the Invicta Series, then the Electra with the Electra 225 being the most well appointed and luxurious.

The original buyer of this car opted for a few extra goodies including: power brakes ($43), power steering ($108) and Sonomatic AM radio ($102) among a few others.

Inside the instrument panel was also all-new with a color-matched Safety Pad available as an optional extra on the LeSabre (standard on Invicta and Electra). There is loads of cargo space too! Almost 5 feet from side to side and 10 feet to the end of the tailgate. Lots of space in the back.

The powertrain consists of a 364 cubic inch Wildcat V8 engine with a Twin-Turbine (the revised Dynaflow) automatic transmission. The latter being a $220 option.

This car is currently for sale o﻿﻿n eBay. (follow the link for even more photos﻿)

This book takes you through some of the most exciting years for Buick cars. Take a look at some of the coolest cars of this era.

Check it out on Amazon
Share3K
Tweet
Pin44
3K Shares