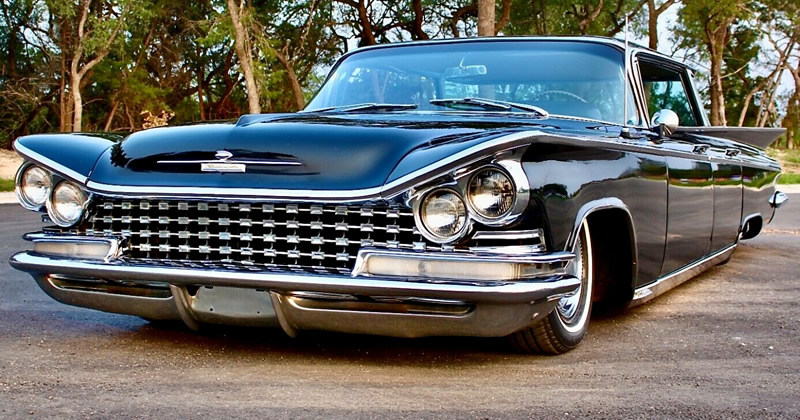 Invicta – The most spirited Buick, was how they portrayed their new performance line for 1959. Just like the Century before it, the Invicta joined the standard size body of the LeSabre (previously the Special) with the larger more powerful Wildcat 445, 401 cubic inch V8.

“If you’re the kind of person who likes high-stepping action…“, touted the original sales literature, “then one of the fabulous ’59 Buick Invicta models is the right car for you“.

1959 Buicks were all new. New names, new body and new engines. They were to wear the biggest fins yet although were much lighter on the chrome compared with the chrome laden ’58 models.

The only distinctive feature from the previous year that was retained was the rectangular squares making up the grille.  The delta-wing canted fins at the rear were reflected at the front where it wore cats-eye like front fender edges over the upward-canted dual headlights.

The paint on this Invicta is original as is the interior with both being in great shape including the Nylon-Balfour cloth and Cordaveen upholstery. (Cordaveen was Buick’s name for their vinyl-like material).

This shot of the rear seats show just how clean this interior is.

Keen eyes will notice this car sits pretty low – it’s been ‘bagged’ and, for those that don’t know, it’s the term for adjustable air suspension. We think this further enhances the already “mean” look of the car.

All-new for 1959 was the 401 cubic inch Wildcat 455 engine producing 325 horsepower and it was standard on the Invicta.

The Invicta certainly wasn’t Buick’s biggest selling series but it sat comfortably between the best-selling LeSabre and the more luxurious Electra. A total of 52,851 Invictas were sold. 20,156 of them were the 4-door hardtop you see here and was the most popular model in the series with a base price of $3,515.

A little more was spent on this particular car when it was first ordered. This included a Sonomatic AM radio at $102, power steering at $108 and air conditioning costing $430.

This ’59 Buick Invicta is currently for sale on eBay. (follow the link for even more photos)