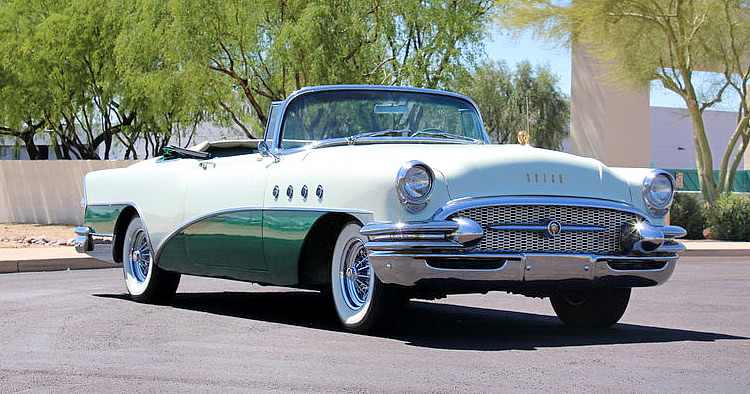 When you bought a top-of-the-line Roadmaster in the fifties you were buying luxury. This was the same C-body that was used on Cadillacs and much of the refinement was found on both cars too.

This 1955 Buick Roadmaster Convertible in Dover White over Belfast Green is all you could want in fifties open-top motoring. Fully loaded with beautiful looks and plenty of performance.

Changes to the rear for this year meant there were now clearly fins protruding – each housing the swept-back ‘tower’ taillights. There were four ventiports on the front fenders on all models except the Special which only had three. Also new for ’55 was the ‘Roadmaster’ script on the rear deck.

Buying a convertible Roadmaster got you regal interiors with pastel-hued leathers in five color choices. There were double-depth rubber seat cushions and horizontal front seat adjustment. Electronically controlled windows were also standard. And, of course, the convertible top was powered too!

1955 saw horsepower up in the Roadmaster, increased to 236 with the 322 cubic inch Fireball V8. This was paired with the performance improved, Variable Pitch Dynaflow Drive automatic transmission. Both standard on the Roadmaster.

Buick sold 4,730 Roadmaster Convertibles (model 76C) for the 1955 model year at a base price of $3,552. It actually worked out about $1000 cheaper than a similar specification 62 series Cadillac convertible.