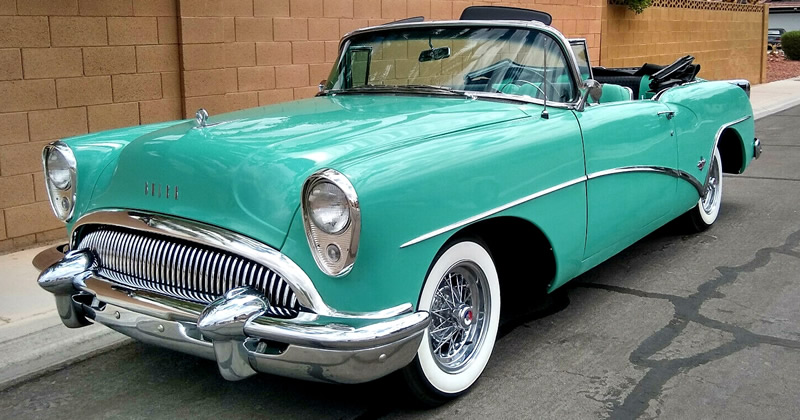 This 1954 Skylark sat at the top of Buick’s line-up and just 836 of them were produced that year with this car being number 787. Compare this to 1953 where Buick produced 1,690 Skylark’s, which is still a relatively low number, you can see this is one rare car indeed.

Subject to a three and a half year restoration it is painted in its original “Gulf Turquoise” and has turned out to be a truly beautiful example.

Buick’s “wild” convertible was the only model in the series. Previously based on the Roadmaster, the Skylark had shrunk slightly for ’54 and now used the Century/Special 122 inch chassis.

Although based on the Century, at the rear we can see the tapered deck lid that was unique to the Skylark. This further accentuated the chrome fins that were grafted on the rear fenders.

Inside, leather trim was standard as was a 4-way powered seat, power windows, power steering and a power convertible top.

This interior was originally black and yellow. It seems an odd choice with the turquoise exterior. So, we are inclined to agree with the decision to match the leather with the exterior color – making it much more striking for all the right reasons.

Under the hood sits the “Fireball”, 322 cubic inch V8 that was the same that the century was equipped with except it used a 7.2:1 compression ratio and is fitted with a 4-barrel carburetor instead of a 2-barrel. This is paired with a Twin-Turbine Dynaflow Drive automatic transmission – a combination that out puts 200 horsepower.

Sadly this was the last we were to see of the Skylark until the name was revived for Buick’s new luxury 2-door sedan during the 1961 model year.