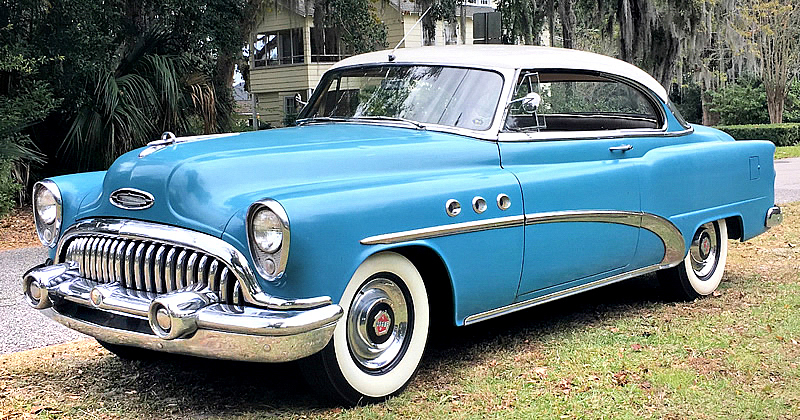 It’s always nice to see stylish fifties cars in great condition that have seen little or no restoration. This 1953 Buick Special two-door hardtop (Riviera) in Tyler blue with gray interior is no exception. It’s can be difficult to fully substantiate mileage but this car shows 29,600 on the odometer and the signs are that it’s the original mileage.

It was Buick’s 50th anniversary and all models received revised styling for 1953. The combination parking / turn signals were now located under the headlamps having been moved from the bumper. At the rear the taillights were  now separated and stacked. Specials were no longer divided into standard and Deluxe categories as all models were now Deluxe.

Specials were no longer divided into standard and Deluxe categories as all models were now Deluxe. Notable standard equipment included; front and rear side arm rests, cloth upholstery, rubber floor covering, turn signals,”Sweepspear” side trim and three ventiports per side.

The Special was slightly narrower at 76 inches, compared to nearly 80 inches on the other models, so didn’t share the sheet metal, bumpers and grilles of the other models.

Sat in the budget price field, the Special offered a touch of luxury. Main competition would have been from cars like the Oldsmobile 88, Dodge Coronet, Pontiac Chieftain, Studebaker Commander etc. Power comes from a 263 cubic inch Straight 8 engine paired with a Dynaflow automatic transmission. Interestingly the Super (Series 40) was the only one in Buick’s line-up that used the straight eight with the others using the new V8 introduced that year. Buick built 58,780 Special two-door hardtops (Rivieras) for the 1953 model year.  The base price was $2,295 and this car is equipped with power steering which was a $177 option when new. Also on the car is the Twin-Turbine Dynaflow automatic transmission costing another $193 and Buick Sonomatic push-button AM radio which was $92.