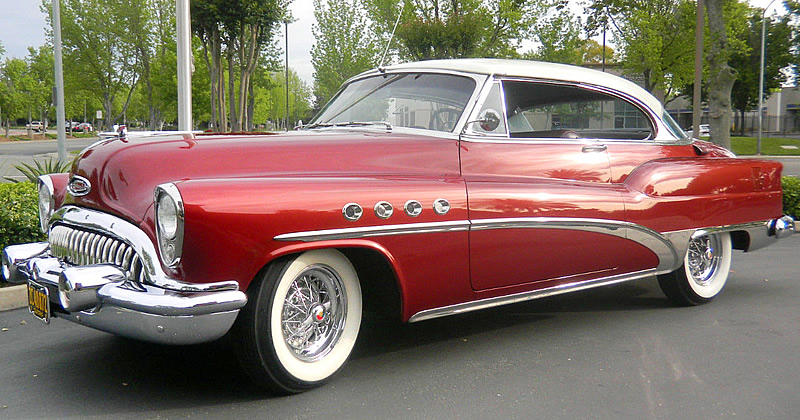 This is a 1953 Buick Roadmaster 2-door Riviera Hardtop and one of the best Buick had on offer that year.

Although the Riviera name was to be used as a model in its own right starting in 1963, during the fifties it was used to describe Buick’s pillarless hardtop models.

The Roadmaster was easy to spot as they had four Ventiports (portholes) on each side whereas the other models had three. The beautiful rear was described by Buick as, “The most graceful good-bye in motordom“. A powered front seat, power windows and power steering were standard in The Roadmaster. This Roadmaster has air conditioning that was factory fitted. In those early days the units were trunk mounted and an expensive option. Power comes from a 322 cubic inch (5.3L) V8 engine which had just been introduced by Buick for the 1953 model year. The Roadmaster got the more powerful of two versions with 188 horsepower and came with a Twin-Turbine Dynaflow Drive automatic transmission as standard.

Previously all their cars had been powered by an inline 8 cylinder engine.

It was Buick’s 50th anniversary that year and in addition to new V8 engines their cars were now using 12 volt electrics (although the Special models were destined for 6 volts for one more year).

This Buick is currently for sale on eBay. (follow the link for even more photos﻿)

This book takes you through some of the most exciting years for Buick cars. Take a look at some of the coolest cars of this era.