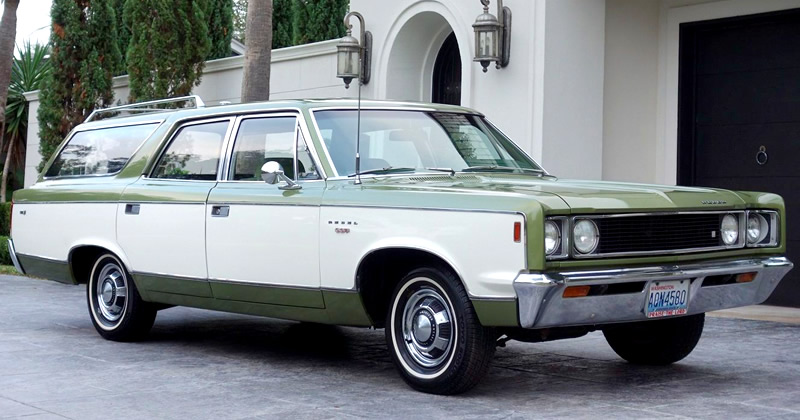 This 1969 AMC Rebel SST 4-door station wagon is something of a rarity. They didn’t make too many of them and station wagons of all makes tended to lead quite a hard life. Add to that this car has just had one owner and covered only 24,000 miles in its life.

The AMC Rebel was introduced in 1967 replacing the “Classic” models and was a mid-sized car. It lasted through to the 1970 model year, after which it was replaced by the Matador. The SST was the slightly more up-market version of the standard Rebel offering better equipment and trim.

The Rebel was based on a 114″ wheelbase with the station wagon coming in at 198″ long. It offered 94.6 cubic feet of cargo space.

There is fold down seating in the cargo space to seat an extra two should you need it. Extra seating in the cargo space

The following photo shows the new, deeper hood covering the instrument panel for 1969. Power comes from a 343 cubic in V8 with 2 barrel carburetor producing 230 horsepower. This is paired with a 3-speed “Shift-Command” automatic transmission. This combination would have cost the original buyer a further $275 when they bought the car new. The standard engine for all Rebel cars was the 232 cubic inch 6-cylinder engine. Covers AMC from its beginning in 1954 right through to its demise in 1987. Great book with plenty of photographs.